Scott McCloud Talks Visual Communications at IFVP and The Grove 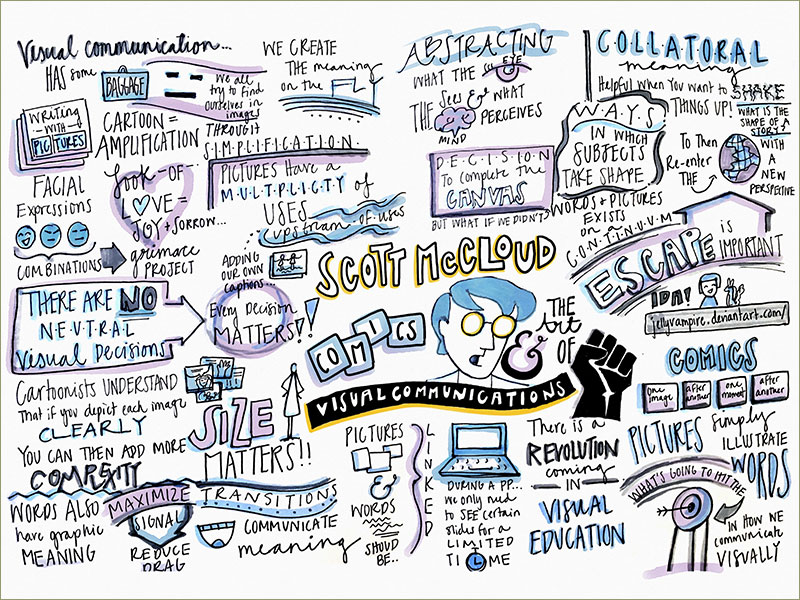 Earlier this year, I attended the International Forum for Visual Practitioners, an annual convening of people who use visuals to build understanding. Among the keynote speakers was cartoonist and cartoon theorist Scott McCloud, a personal hero of mine. Here are my visual notes from his presentation.

As a graphic recorder, I especially resonate with Scott’s point that “there are no neutral visual decisions, and every decision matters.” When choosing shapes and colors to use on my charts, I now consider the literal meaning of the visual elements, their metaphorical meaning, and how a particular visual decision may impact participants’ understanding. It’s about much more than simply what will look good together.

On the last day of the conference, I crossed paths with Scott over breakfast. During our conversation, he told me about a new book he is working on—as he put it, “…something like [an] Elements of Style for visual communication.”

I immediately wanted to connect him with the founder of The Grove, David Sibbet, who has pioneered the practice of graphic facilitation (also known as “visual facilitation.”) David and Scott have both influenced me to be more conscious in the choices I make as a visual practitioner. See especially David’s Visual Meetings and Scott’s Understanding Comics. 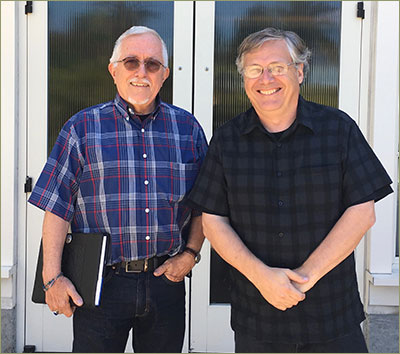 Soon after the conference, Scott and David met for the first time, and I was a “fly on the wall” during their conversation at The Grove. One of my favorite nuggets of their exchange came when David introduced the jazz metaphor:

“I have long held that what we are trying to do at The Grove with visual facilitation is to create the field of ‘conceptual jazz.’ … What I love about jazz is that the freedom to play well is a product of the discipline of learning chords that can be combined and recombined. Once you have mastered the chords, then you can think melody.”

Scott chimed in, “With that harmonic structure underneath, now you can play. Now you can rearrange the furniture.”

Later David elaborated to me that in visual facilitation, the display formats are the chords, the rhythm is the pacing, and the topics are the melodies.

These recent conversations have reinvigorated my creativity when using visuals with groups. Like musicians, we visual practitioners each have our own style, structure, and composition. It takes the right orchestration in the room for the harmonies to be complete. 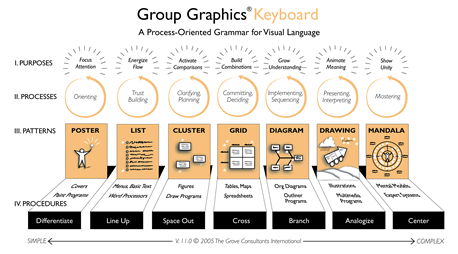 During their meeting, David walked Scott through a teaching model that David created, the Group Graphics® Keyboard. It identifies seven possible formats for organizing information in a shared display. To learn more, read “The Importance of Picking the Right Format” in David Sibbet’s book, Visual Leaders. Visit Scott McCloud’s website to learn more about his work.

Workshop Opportunity: Learn the fundamentals of using graphic communication with groups at The Grove’s Principles of Graphic Facilitation workshop.