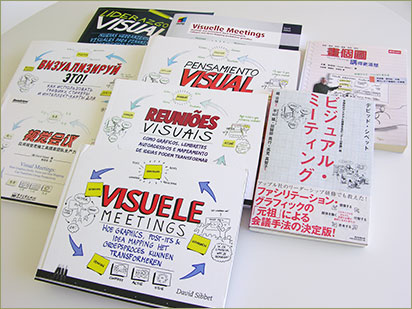 The Grove is experiencing one of our busiest years in a decade, and we are serving more international clients than ever. This, alongside the recent EuViz conference in Berlin and our growing number of global partners, is prompting increased focus on how we can best support this worldwide evolution of visual practice and interest in Grove methods.

In August The Grove’s David Sibbet, Rachel Smith, and Gisela Wendling participated in EuViz-Berlin, the “European Conference for Visual Thinkers, Practitioners and Facilitators.” (1) The conference drew 220 visual practitioners from 29 countries on five continents, yielding a rich cross-fertilization of perspectives and approaches. 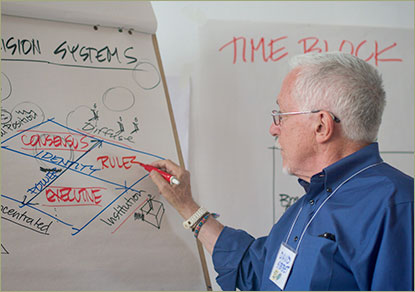 EuViz revealed the exponential growth taking place in the realm of visual practice that The Grove has been helping nurture since the 1970s. Hundreds of small consultancies worldwide now offer graphic recording, visual facilitation, graphic-animation movies, illustrated meetings, virtual recording, information design, visual coaching, doodling workshops and more. Although this work takes many forms, all of its manifestations are rooted in the power of visualization.

“EuViz was fantastic,” Rachel Smith reports. “Visual practice is such a broad field now, and almost every aspect was represented. It was a very international group and I loved seeing how far the practice has spread.”

This pulse of growth reflects a growing understanding about what The Grove has known for years—that when people are listened to visually they engage; when they can think in big pictures they can tackle more complexity; and when there is wonderful documentation in different media people can follow through and get results.

There is no question this growing awareness has been greatly helped by David Sibbet’s three-book Visual Leadership series (published by Wiley & Sons): Visual Meetings (2010), Visual Teams (2011), and Visual Leaders (2012). Many people who inquire about Grove services say they found out about us through these books. Extensive translation of the series (see below) is seeding worldwide interest in applied design thinking, large-scale visualization, and interactive, immersive experience in tackling the big challenges that organizations and communities face.

The Visual Leadership Series in Translation 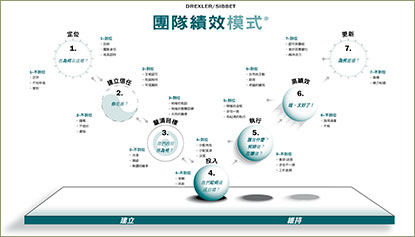 The Grove’s global work is not just about visual practice. As many of you know, The Grove has applied its visualization and process savvy to create accessible tools, such as the Drexler/Sibbet Team Performance Model® (TPM). More and more clients are deploying the system globally and discovering that the TPM and its related tools work well across cultures and functions.

Laurie Durnell helped train people all over the world for W. L. Gore this year (see related article). A new partner, Team Performance Systems Deutschland (TMS-D), is translating our online Team Performance Survey and guides into German and will be making them available through trainings in 2015.

All of this and more has led The Grove to increase the focus on our global partnerships. This means doing more collaborative work together as well as exploring how to become a more robust learning community.

We are excited that so many people want to learn how to work across cultures and globally, and we look forward to cultivating the global reach of visual practice. Was there ever a bigger need?