How do you embed Team Performance within a global company? W. L. Gore & Associates, Inc. is showing the way. Human Resources (HR) at Gore is “going big” with The Grove’s Team Performance offerings to support its 10,000 associates worldwide. 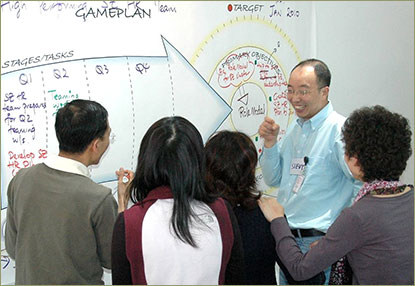 The culture at Gore prioritizes innovation and “the power of small teams.” Although Gore is best known for its Gore-Tex® waterproof outdoor gear, its wide-ranging products are in use “from the surface of Mars, to the permafrost of the arctic, to inside the human heart.” (1)

Training Gore’s global Human Resources core team and business partners was the first step. The Grove’s Laurie Durnell led on-site Team Performance trainings in Arizona, Maryland, Germany and China, with one more to follow soon. When this phase is complete, Gore will have close to 100 HR practitioners with expertise in Team Performance, yielding considerable depth and capacity.

Gore project lead Gail Townsend, an organization-development specialist and senior HR business partner, has used the Team Performance System for more than 20 years in her work with teams. She reports, “Our HR community is excited. People are talking about it. The Model (the Drexler/Sibbet Team Performance Model™) is becoming our common language for how we talk about teams. We can barely keep up with the demand.”

Cheri Budzeak, part of the core HR group that is bringing Team Performance to Gore, comments, “For me, this framework makes my job so much easier. With so many great practices to choose from, it is easy to customize the interventions.”

Gore intends to create and sustain high-performing teams proactively, not reactively. The HR team has a vision: to have less than 5 percent of its team interventions be reactive engagements. Gail comments, “If we’re doing all the right things proactively, there should be very little reactivity.”

HR practitioners are alerted to the types of events that may signal the need for a Team Performance intervention. For example, new people have joined the team… or people have left the team… or a re-organization has occurred… or the team’s core mission has changed. By stepping in proactively, the foundation is laid for innovative, successful teaming in the new configuration.

With associates on three continents, Gore often finds it necessary to work virtually. Its IT and HR teams are developing best practices for collaborating across multiple locations, using TPS as an operating system.

To support its widely dispersed teams, Gore envisioned an online portal where both HR practitioners and team leaders could easily access Team Performance tools and resources. This would reduce dependency on HR by facilitating team leader education, backed up by accessible tools that have been tailored to Gore’s culture and teaming needs.

The Grove worked with Gore’s Communications, IT and Human Resources teams to create a tailored intranet-based solution. This newly launched Team Tools site has everything necessary to create and sustain high-performing teams. (To view an example of a customized Team Tools website, visit this case study.)

Laurie Durnell recently returned from doing a Team Performance training at Gore’s facility in Shenzhen, China, at which she introduced the HR team to online resources including The Grove’s Team Performance Survey. She reports that team members are excited that Team Performance tools can now be accessed online, bypassing the delays involved in international shipping. 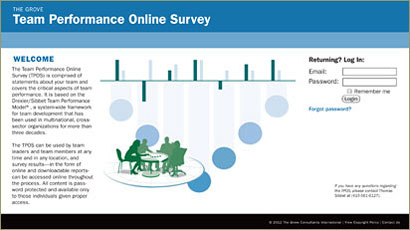 In the third and ongoing phase, HR is inviting team leaders to do Team Performance interventions, supported by the intranet teaming resources in consultation with HR specialists.

At an organization such as Gore in which everybody teams, there are many more leaders of teams than there are HR business partners to facilitate them directly. Making Team Performance accessible on Gore’s intranet is a game-changer for extending the reach of teaming resources throughout the company.

Cheri summarizes: “I have used Team Performance with over 20 teams since our training six months ago. I am finding that all of my business is coming from referrals now, and it’s working well. Instead of being stuck in the questions of ‘where are we going?’ and ‘what are we doing?’ these teams are focused on moving forward.”

Gail chimes in: “We now have common language for teaming that unites us within Gore’s team-based culture. People are embracing this way of working and seeing its value. They are taking time to do commitment clarity—not in a PowerPoint kind of way, but a truly interactive way. They are creating space for trust-building. People are prioritizing activities that lay a foundation for strong, effective teaming.”

With Team Performance now firmly embedded in the HR structure and Team Tools readily accessible online, Gore is well on its way to achieving its objective: organization-wide support of its teams to be the best they can be.

2. Photo #1 was taken at a Team Performance planning session with a Gore team.

3. Photo #2 is from W. L. Gore’s website, with a caption that reads: “A company that celebrates successes, large and small, as teams.”