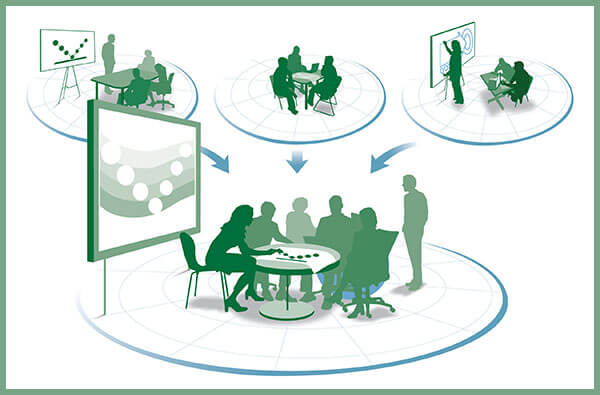 Increasingly teams are being mashed together: different specialties or functions, or different parts of organizations being merged as a result of leadership experimenting with cost-cutting or efficiency initiatives. This new landscape of teaming benefits from focused approaches to syncing up these newly formed teams. The goal is to integrate their efforts smoothly and achieve the organizational benefits they were reconfigured to achieve.

For example, in multiple organizations, we have worked with recently, functional teams previously based in the divisions were centralized in corporate headquarters. Then a magic wand was waved and bingo, a new team was born. Extra responsibilities were added to already full workloads. Team members looked around at each other and said, “Okay, we’re a team. Who the heck are you?”

“We Used to Do It That Way”

When different functions are linked that may not have worked together previously, the newly integrated team needs—in a time-efficient manner—to get acquainted with one another and make agreements about the work to be done, who is going to do it, and how it will be accomplished. The risk is that people will revert to old patterns and relationships as a survival tactic in the face of uncertainty and lack of clarity.

“We used to do it that way” is a fallback approach that reflects more than resistance to change. Team members’ success models were based on their understanding of what is characterized as Stages One through Five in the Drexler/Sibbet Team Performance Model® (Model), roughly translated as purpose, trust, goal clarification, role/decision clarity, and agreements about who does what, when and where. All of those understandings need to be renegotiated—not only internally with the team, but also with the team’s stakeholders.

If these issues are unaddressed, challenging dynamics are likely to arise between team members and their stakeholders.It is difficult to present a united front about changes to stakeholders when the team itself isn’t clear about what its new boundaries are, who the decision-makers are, and what its roles and priority deliverables are.

What guidance does the Model give for supporting integrated teams to become productive and effective as rapidly as possible? Organized by stages of the Model, the following is a set of opportunities that the new configuration brings—responses to the challenges that clients have been reporting to us. 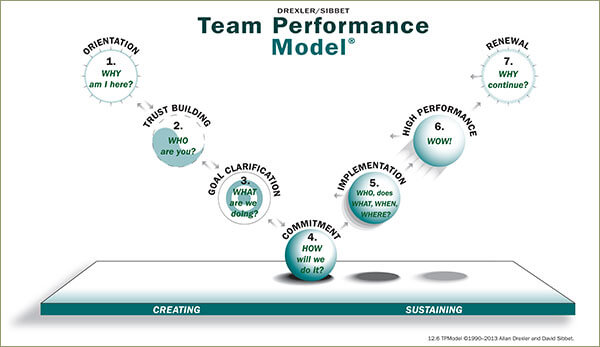 To leverage the opportunity of being together in this new integrated structure, one of the first things that the new team needs to do is to orient to its new team identity. This is Stage One: Orientation. People may be doing the same work, but they are doing it within a new team structure and context, so there is a new Stage One to sort out.

Recommended Practice: A great way to do this is to clarify the team’s charter, with an emphasis on purpose and membership. This is essential because sometimes teams experience being thrown together without a clear purpose. Once the new charter has been created, reflect the team’s understanding back to the organization to make sure that the team and stakeholders are in sync. “Charter Clarification” can be found on page 62 of The Grove’s Team Leader Guide.

In Stage Two: Trust Building, the team needs to connect on the human level and develop the interpersonal connections that smooth the way when inevitable issues arise. The goal is to build cohesion and break down the potential for groups to start working only with the people they already know.

Recommended Practice: A useful best practice in Stage Two is History Storytelling, in which people share their experiences of working in the organization. This activity allows team members to get a sense of the skills that people have and the networks to which they are connected.

Also, as Bill Bridges’ work indicates, an important step in opening people up to accept change is first supporting people to recognize and acknowledge what they treasured and what they lost in the previous situation, as part of a transition to the new one. History Storytelling gives members the space to celebrate and acknowledge the past while opening the door to new potential. It supports the human side of change.

This is simultaneously a Stage Seven: Renewal move. As you reformulate the team, people need to let go of the old team of which they were a member, celebrate their experiences there, and make space for opening to the new team.

Recommended Practice: Different teams may have different cultural norms, so if two teams have been integrated, revisit operating agreements. This lays a foundation of trust and creates a new combined culture going forward. “Committing to Group Norms” can be found on page 131 of The Grove’s Best Practices for Facilitation.

Recommended Practice: Make time to do something fun together. As Victor Borge liked to say, “The shortest distance between two people is a laugh.” Although it is great if this can happen face-to-face, there are also many fun ways to engage online.

So what is the NEW “we” going to say YES to? One of the top priorities in Stage Three: Goal Clarification is to sync up on the strategic priorities and direction for the newly integrated team or newly reorganized team. Part of that conversation is, “What has changed with our focus in this new form? What are we saying yes to? What do we now need to say no to? And how do we communicate that consistently to our stakeholders?”

Recommended Practice: Revising the team’s strategic plan is a good way to build alignment. Often teams get reorganized as a cost-saving measure, so they may not have the resources to accomplish everything they delivered before. This shift creates a silver lining—the opportunity to let go of less strategic ‘busy work” that has built up over time, refocusing on what will make a difference for the organization going forward. “Goal Alignment—Top/Down” and “Goal Alignment—Bottom/Up” can be found on pages 96 and 97 of the Team Leader Guide.

Recommended Practice: One of the biggest challenges is managing stakeholder expectations. This puts a premium on the team having a consistent understanding of its priorities, roles, accountabilities, and processes because stakeholders will be pushing for whatever it is that they received in the past. Set your priorities and share them with leadership to jointly reset stakeholder expectations. Stakeholders need to hear the same story from everybody. “Goal Alignment—Horizontal” can be found on page 98 of the Team Leader Guide.

The newly integrated or reorganized team may create different interdependencies, overlaps, gaps, and a general lack of clarity about responsibilities. Renewing clarity around roles is critical. Revisit decision rights, decision owners, and where each team member’s scope starts and stops. These are vital Stage Four issues to resolve. Once you figure out your priorities—which is job number one—get clear about roles, and after that, have a conversation about accountability. Don’t forget to account for shifts in how adjacent teams receive handoffs in the new configuration.

Recommended Practice: People on a new team are often careful about stepping on toes, so the pace of decision-making can lag. Determine upfront which decisions can be made close to the work, as well as scenarios in which more voices should be included so that not everything needs to be run by the full team. The “Responsibility Charting” practice found on page 117 of the Team Leader Guide can be modified to include both decision rights and decision owners. Combining this activity with public “Role Alignment” found on page 116 can provide great clarity for the new team.

Stage Five: Implementation (and Beyond)

Who does what, when, and where on the new team? A newly integrated team needs to create an operating model, including structure, accountabilities, and governance mechanisms. These are ways of working that together comprise the team’s blueprint for how its work gets done. The Stage Five: Implementation opportunity is to align decision-making and roles around processes. These things go hand-in-hand.

Recommended Practice: A specific practice to clarify accountabilities, roles, and decision-making is to create a process map of the work to be done. Once you have the base map, you can identify who is responsible for what, shift the less-effective old approaches, and anticipate barriers to getting the work done well. “Process Maps” can be found on page 130 of the Team Leader Guide.

With this groundwork in place, your new team will be well on its way to Stage Six: High Performance.

Laurie Durnell is co-president of The Grove Consultants International and a senior consultant. She trains, facilitates, consults with, coaches, and supports organizations that are embedding Team Performance as their model for teaming. Laurie has worked in organizational consulting, team development and management since 1993 and has facilitated many team integrations. A seasoned visual facilitator and trainer, she has designed and delivered training programs for a wide variety of high-performance teams: executive, cross-functional, self-managed and project teams. She has an MBA from Simmons Graduate School of Management, with an emphasis on organizational development, and a B.S. in natural resource conservation from the University of California, Berkeley.

Learn more about the Team Performance™ System and our consulting services to support teams.

Watch a short video about our Team Performance services.