A Look Back: Reflections on 35 Years of Visualizing Change

On October 7, 2013, David Sibbet was a featured speaker at the National Organization Development Network (ODN) Conference in San Jose, California, where he received ODN’s Lifetime Achievement Award. The following article is adapted from his conference presentation and his remarks at the awards ceremony.

I was invited by several ODN colleagues to share with you some of the shaping influences underlying my work and The Grove Consultants International’s methods. It’s an honor to receive this award, and humbling to reflect on the path that brought me here. I’d like to do this with a bit of storytelling.

A Lifetime of Inquiry: Early Roots

Above is a picture of the mountain range that I saw out of the window of my bedroom from ages 4 to 14. It’s the eastern side of the High Sierras, a vast high desert park that has been left pristine because Los Angeles owns all the water rights. These mountains are quite tall, and the White Mountains, another range on the other side of Owens Valley, are equally tall— tall enough to prevent television signals. So I grew up without television; that’s zero television. Because my father was a minister, I also didn’t get to see many movies, because we didn’t go to movies on Sunday.

This isolation fostered enormous curiosity about what civilization was like beyond our little town of Bishop, California. My passion for inquiry continues to this day. How do cities work? What shapes people in flatland cultures? Is deep experience with nature important in a high-tech, urban world? How does language work? Is Earth the only inhabited planet in our galaxy? (The Milky Way, by the way, is VERY visible on an average Bishop night.)

At Occidental College, where I went to study physics, a quirk of fate planted the seed of my lifework in visual facilitation. During hazing week at the beginning of the school year, seniors were supposed to compete with incoming freshman by putting on events. The seniors had a special advantage in the name of Terry Gilliam, who later became the American animator for Monty Python. Terry did big quad posters for the seniors announcing their events, which made our freshman class look shabby.

So a classmate and I decided to compete with him, even though our posters weren’t anywhere near as good. I ended up doing quad posters all the way through college, always trying to reach the high bar set by Terry Gilliam. In spite of being red-green color blind, I’ve always been able to draw. I became quite good at big-scale poster making. I also ended up as editor of the college paper, and I went on to study journalism at Northwestern University’s Medill School.

Think about it: if you put journalism together with Terry Gilliam, you get … me!

From 1969 – 1977 I worked in San Francisco for Coro Foundation (now the Coro Center for Civic Leadership), an experiential nine-month program that continues to this day. The Fellows worked in the field four days a week, then met together on the fifth day to make sense of their experiences. I orchestrated these sessions—four to five dozen a year. We were neighbors with Interaction Associates, strong advocates of a facilitator/recorder approach to meetings.

I started recording Fellows’ sessions, interviewing them and mapping on big paper what they were finding out. All my quad poster experience kicked in and I went large-scale right away. Without really knowing what I was doing, I collected every example of graphic thinking that I could find.

At that time there was no such thing as a graphic computer. There was no PowerPoint. People did communications on acetates with Sharpies. But a group of us were convinced a communication revolution was coming. 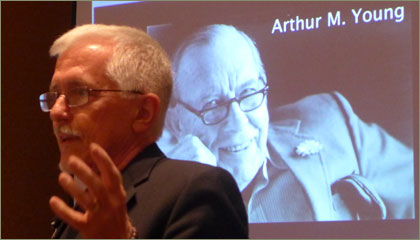 In 1976 I was introduced to Arthur M. Young by a colleague who said, “This guy has the most developed, integrated theory of process I’ve ever seen, and he explains it all with graphics.” It turned out to be geometry, the most abstract of graphics, but Young’s Theory of Process provided the organizing structure for making sense out of visualization processes.

“Group Graphics” emerged as a methodology; by 1980 I wrote my first book, I See What You Mean: Group Graphics Workbook Guide. (1) 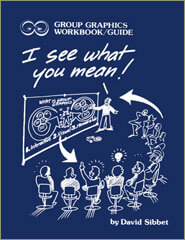 As this work progressed, I began to see underlying patterns. Of all things we tried in those days, storytelling and graphic histories were the most compelling. I have never facilitated a group telling its story in which the process didn’t blow the agenda out of the water and take twice as long as was intended. Invariably, though, groups love it.

My experience developed into an inquiry into group dynamics—the content of traditional OD. I found people often hesitate to talk about this or that horrible thing in their history. Yet as you all know, the demon that is under the table is a lot more powerful than the demon that is growling on top of the table. I discovered the cathartic power of people in community moving to new levels of understanding, empathy, and insight after finding the courage to share their truths together, guided by the reflective, graphic listening that accepted all accounts as worthy of record.

Put storytelling together with graphic histories and you get Storymapping™, the Grove’s tool for getting alignment. Storymaps are intended to be backdrops for leadership stories. They require a series of meetings and lots of editing and agreeing, not only to get the messaging right, but also to agree on how to embed it in imagery and metaphor. Adding these elements to strategic communications allows aspects of culture and values to be a key part of the story. Developing the maps co-creatively makes it possible for many different people, especially leaders, to “get on the same page”—literally. It’s a process of alignment through graphic dialogue. In addition, the resulting artifact has value.

Leaders who use the large murals after they are created do not have to worry about getting facts right when they present, as these are visible on the Storymap. This allows presenters to focus on the emotional component, the life within the story—what it means to them. The smaller printed versions that are often handed out will have new meaning and depth for many of the listeners.

Below is an example of a Storymap from my work with HealthEast. The process of its creation is explained in full in Chapter Two of my most recent book, Visual Leaders, and is also summarized in this short video.

Journaling as a Practice

If you imagine my work as a visual facilitator from these few examples, in meeting after meeting all over the world, in all kinds of organizations with a wide variety of objectives, it might occur to you that I might get a little confused. Well, if it hasn’t occurred to you, let me assure you: yes, it can get quite confusing. To drench myself in other people’s thinking week after week and stay open is tough. I have to, though, because my listening is visible.

So how have I stayed grounded? How have I stayed oriented to what I am doing? I want to share with you a tool that I find to be particularly important for this: journaling.

At this point I have completed 175 journals. I do journaling as a practice, way more seriously than just documenting things. I do it to stay connected with not only my thinking but also with my soul, my feelings, and my intuition—my integrated self.

I track myself in these journals. I study them and look for long cycles and blind spots. I search for patterns in all the myriad ways people make sense of the world.

A Lifelong Exploration of Conceptual Models

One strand of my inquiry has been identifying all the conceptual models and frameworks that move in our field … documenting, listening, figuring out why this is included and that is excluded. In addition to the work of Arthur Young I have studied the Enneagram … General Semantics … Ken Wilbur … Theory “U” … What’s going on with Lexioni’s pyramid of dysfunctions?

Below is a page out of my journal from 2006. Many of these models use some kind of image or graphic as a reference point. In practice, they become mental models and operating systems (something I explored in some depth in my last book, Visual Leaders). 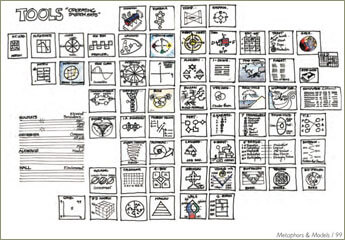 In retrospect I think my curiosity about conceptual tools is rooted way back in my Bishop-bred fascination with how humans organize themselves.

OD (organization development) is an amazing field. The fact that people don’t understand what we do is one of its great features. Practitioners can legitimately explore unlimited territory in the name of whole systems—and I intend to.

I often describe my work as being Fool to the King of the group—taking on the role of a sacred clown. Maybe that role is comfortable because the work has cracked me open. I see a lot of things we all need to wake up to. Increasingly I feel the need for and have the capability of speaking truth to power.

So right now, at age 69, with my wife recently passed away, I’m free to go 150% contribution. In a wonderful way I feel I’ve just started to see the potential of where this work can go.

David Sibbet is founder and president of The Grove Consultants International.

1. I See What You Mean has since been updated and republished as Graphic Facilitation, available through The Grove store.