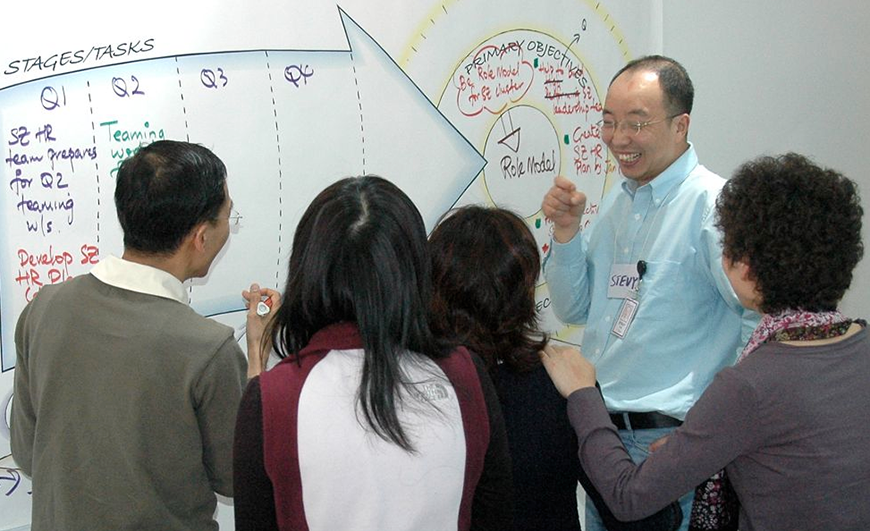 The experience of W. L. Gore & Associates, Inc. models best practices for embedding Team Performance within an organization. Gore has 10,000 associates worldwide, all of whom are on teams. The company's culture of innovation prioritizes “the power of small teams.”

Within this dynamic teaming environment, The Drexler/Sibbet/Forrester Team Performance™ System was introduced at Gore in 2007. Six years later, Gore asked The Grove to help make Team Performance its organization-wide teaming system. The four core elements of Gore's approach are:

Train the HR Team: Gore's HR arranged for on-site trainings in the United States, Europe and Asia. To date, close to 100 HR core team members and business partners have been trained in the Team Performance System for creating and sustaining high-performing teams, yielding considerable depth and capacity. HR is now inviting team leaders to do Team Performance interventions, supported by the intranet teaming resources in consultation with HR specialists.

Use a Proactive Approach: HR seeks to engage with teams more proactively and less reactively. In support of this goal, HR team members are alerted to the types of events that may signal the need for a Team Performance intervention. For example, team membership changes… or a re-organization has occurred… or organizational priorities shift… or a team is out of sync with its customers. Proactive engagement lays a foundation for innovative, successful teaming in the new configuration.

In team-based organizations, such as Gore, there are many more leaders of teams than there are HR business partners to facilitate them directly. Making Team Performance accessible on Gore's intranet is a game-changer and extends access to teaming resources throughout the company.

“We now have common language for teaming that unites us within Gore’s team-based culture. Associates are embracing the Team Performance Model and its supporting language. We are prioritizing activities that lay a foundation for strong, effective teaming.”