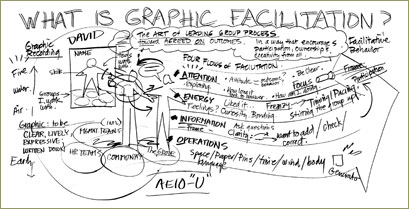 What Is Graphic Facilitation?

To begin, let me share a story that illustrates how graphic facilitation works. Recently, a rapidly growing human resource development consulting firm operating in China and Japan asked my company, The Grove Consultants International, to come to China and teach its consultants graphic facilitation. In spite of a tradition of using wall posters for communication and having a language based on ideographic characters, the firm had not made the leap to using graphics as people use spoken language—in an interactive way.

To orient everyone, I drew the chart depicted here and told a story about how a facilitator manages the four flows of activity in any group process. The top levels of the graphic illustrate the attention and intentions of the group. Next is the physical energy and movement created by the activities and interaction of the group. The third level shows the flow of information, referring to all of the things said by the participants in the meeting as recorded on charts and boards or presented in tables and graphs. The final level, bottom line, represents the flow of operations, meaning the physical and organizational mechanisms that provide the means of expression for the group.

This chart was in full color and measured four feet tall by eight feet wide. The words in the four different levels were drawn from the group in an interactive dialogue. The process manifested some results that are typical for groups being facilitated with interactive graphic visualization of this sort:

My field experience shows that even beginning practitioners of interactive graphics achieve these same results. So what does this teach us about cognition?