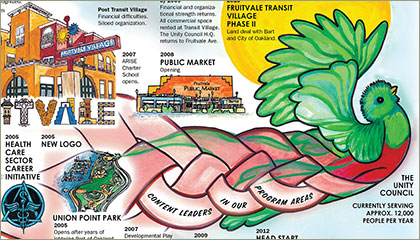 The Unity Council was born in challenging times. In the 1960s, a freeway cut through the heart of Oakland and, as in many American cities, the result was an era of urban decline and poverty. During this time, the civil rights movement was gaining strength.

Latino activists from several organizations joined forces in 1964 to form The Unity Council, with the purpose of having a stronger, collective voice for their unrepresented community.

A Mural Project Is Born

With the organization nearing its 50th anniversary, newly appointed CEO Chris Iglesias approached The Grove Consultants International to develop a visual timeline of their storied history. In true Unity Council fashion, it was requested that artists and young people from the Oakland community be involved in the project. The Grove then collaborated with muralist Ray Patlan, his student Morgan Valdivieso, and an Americorps member, Ricardo “Panda” Fuentes to brainstorm ideas, draw concepts and eventually paint the final artwork. 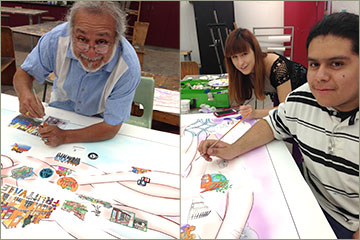 Information was gathered for the mural from written history and through facilitated storytelling sessions with The Unity Council’s founders, board members, leaders, and staff. Major milestones, key people, and themes came out in these sessions.

A key theme expressed in the first storytelling session was the comprehensiveness of the services provided by The Unity Council over the years—leadership development, education and employment, economic development, and more. The idea came to depict ‘woven’ services as a braid, recognizing the many women who have been leaders at The Unity Council.

Arabella Martinez, one of the founders of The Unity Council and its first executive director, did much of the speaking at this first engagement session. After hearing about her remarkable feats as the first Unity Council leader, Ray Patlan conceived the idea that Martinez be depicted as a hummingbird, known for its unrelenting work and strength. In Aztec culture, the hummingbird is considered a warrior.

In a second storytelling session the group focused on more recent history. It became clear that the organization had greatly evolved in recent years. Former CEO Gilda Gonzales helped stabilize and strengthen the organization, as is noted by a tightening of the braid.

The Unity Council came to be viewed as a content leader in its program areas, and people from The Unity Council were regularly asked to speak on panels. This organizational surge is represented by a Quetzal, a bird notable in Mayan history. Like a soaring eagle, the Quetzal legend illustrates nobility of spirit and reflects the people it represents.

A History of Community Progress

Throughout its trail-blazing 50 years, The Unity Council has grown from a volunteer organization of activists to a model organization of community-development work. It currently serves approximately 12,000 people per year. 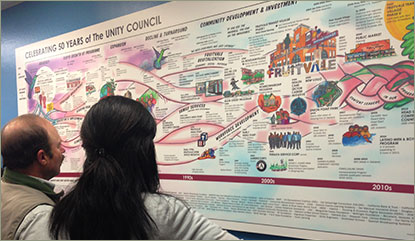 Here’s how CEO Chris Iglesias summarizes their experience: “The Unity Council History Mural project has allowed me to reunite those who have built The Unity Council over the past 50 years. It has allowed me to listen and learn how needs in the community were addressed and then met and how our programs have evolved over the years. The History Mural has been very well received by our board and members in the community as well as by our elected officials including Mayor Quan, Congresswomen Barbara Lee and Assemblymember Rob Bonta. It is a great way to kick off our 50th Anniversary in 2014.”