The Power of Fluid Teaming 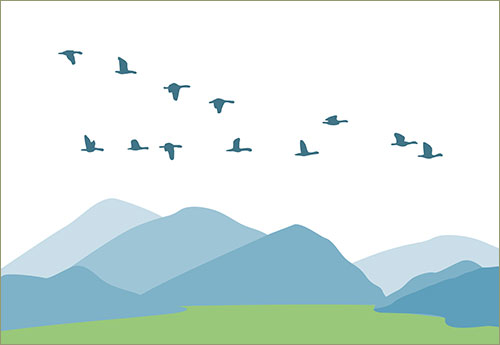 The landscape of teaming no longer centers around just a single team working on one challenge for a period of time. Yes, such teams still exist, yet increasingly teams are as fluid as flocks of birds that fly through the sky, separate into pods, swirl back together and re-form again. Although every bird is more or less flying in the same direction, the configuration that any one bird is flying in and the group that is its flock differ from moment-to-moment.

Individual contributors are often called together quickly to do teaming, either for short periods of time or around particular projects in which collaboration is needed (1). Effective teaming supports a group’s ability to join in doing the work within whatever configuration best serves the goal at hand. This occurs across a continuum from loosely linked individual contributors to work groups to true teams requiring a high level of interdependence.

For this more fluid form of teaming, the ways in which birds group together in flight are instructive (2). Boids, a computer modeling program created by Craig Reynolds, simulates flocking behaviors via the interplay of alignment, separation, and cohesion. In other words: stick together, don’t get too close, and move in the same direction. Using just these three simple rules, Reynolds created successful computer simulations of flocking birds and schooling fish.

Like Boids, the Drexler/Sibbet Team Performance Model® (Model) is a clear, simple framework designed to address the challenges of teaming. Organizations and enterprises—from the level of an individual flock to complex globally linked networks of flocks—are discovering the power of embracing this set of simple guiding principles. In Boids’ computer simulation, these are called “steering behaviors.” (3)

Essentially, the Model articulates a series of steering behaviors. It provides a core set of understandings and tools for effective flocking—things such as vision, shared purpose, and clear goals—so people don’t bash into each other because they lack role clarification… and so they can keep “flying” in the same direction and don’t start veering off course.

In the current global teaming environment, individuals typically are part of flocks. Teams are constantly changing and re-forming as project needs evolve. At any one point, a team might consist of innovators; then it may move into a prototyping phase or an implementation phase, requiring a different team configuration that will bring in different capacities.

To team well and time-efficiently with others within ever-changing work relationships, you need a set of standard operating procedures that will help you get on the same page quickly so you and your team can complete your work successfully. This jumpstarts teams to the next level of performance.

Once these operating standards are clearly understood by team members, they can focus on the work that the team is chartered to accomplish. This is essential to what the Drexler/Sibbet/Forrester Team Performance™ System provides, along with the many tools and processes that help people work together more effectively and enjoyably—and truly take flight as teams.

1. For more on the change in emphasis from teams to teaming, see Amy C. Edmondson’s book Teaming: How Organizations Learn, Innovate, and Compete in the Knowledge Economy, Jossey-Bass, 2012.

2. See Peter Friederici’s article, “How a Flock of Birds Can Fly and Move Together,” Audubon Magazine, March-April 2009.

3. Watch a video simulation of Boids.