The Book Sprint: Visual Practitioners Around the World Come Together to Write and Learn 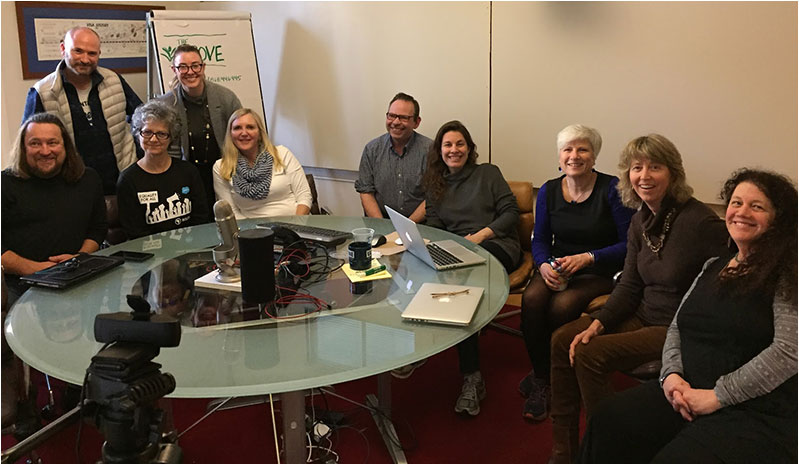 More than 50 authors joined in a three-day global book sprint to create The Visual Facilitation Field Guide, a project launched by Jeroen Blijsie in The Netherlands. The book’s co-editors are Jeroen, Tim Hamons in Singapore, and Rachel Smith in the United States. The authors represent a broad spectrum of the field of visual practice. Their goal: to write a book that raises the profile of these methods and makes them accessible for both practitioners and clients.

Contributors worked around the world (and some around the clock) in The Netherlands, Singapore, and San Francisco, with authors in other locations connecting virtually. The North American contingent gathered at The Grove in San Francisco. The Grove’s Laurie Durnell, Tiffany Forner, Malgosia Kostecka, David Sibbet and Rachel Smith participated, with Rachel facilitating the North American portion of the sprint.

Writing Around the World

The book sprint embodied a different way of working collaboratively. The process flowed back and forth between connecting and doing individual writing. Check-ins, either virtual or face-to-face, were organized for the beginning and end of each day, hosted by Mary Alice Arthur (USA), who was based in The Netherlands. 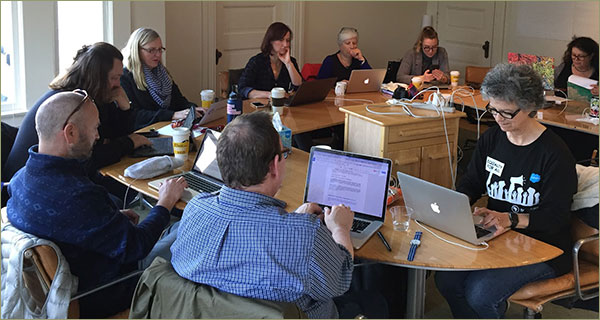 After the morning check-in, the authors dove deeply into their own writing. When ready to share their work, they would receive feedback from other co-authors. During this process, authors connected and interacted with familiar and unfamiliar colleagues in the field.

It was amazing to watch folks flow in and out of a focused writing state, then huddle with someone to discuss a portion of their writing, or jump onto a Zoom videoconference call with someone across the world to share ideas. Then they would cycle back to work on their own chapters with fresh eyes.

Design of the Writing Process

Each author was assigned one or more chapter topics based on his or her particular expertise. Synopses were shared in advance through a collaboration space at The Global Learning & Exchange Network (The GLEN). Pre-sprint dialogue via Facebook and The GLEN helped set the tone of community openness from the start. As the chapter synopses started being posted in December, excitement built about the quality of the contributors and their topics.

Here is the book sprint’s flow of activity: once a writer turned in a first draft of a chapter via Google Docs, it was added to the Book Project Tracker using Trello, a virtual project-management tool. The chapter showed in the “Review Cycle One” column, signaling that co-authors around the world could open it, read it, and make comments in the document.

After receiving a round of reviews, the author began first-round revisions. When the next version was ready, the revised chapter’s Trello card would be moved to the next column for the second round of inputs. After a final revision, it was placed into the last “Ready-For-Editing” column. At that point, the chapter was ready for the three co-editors: Jeroen, Rachel, and Tim.

Connecting with Other Authors

Authors reviewed other people’s chapters while waiting for comments on their own. The review process made the authors think more deeply about different points they could strengthen or make more explicit in their writing, as well as exposing them to new practices to incorporate into their own work. 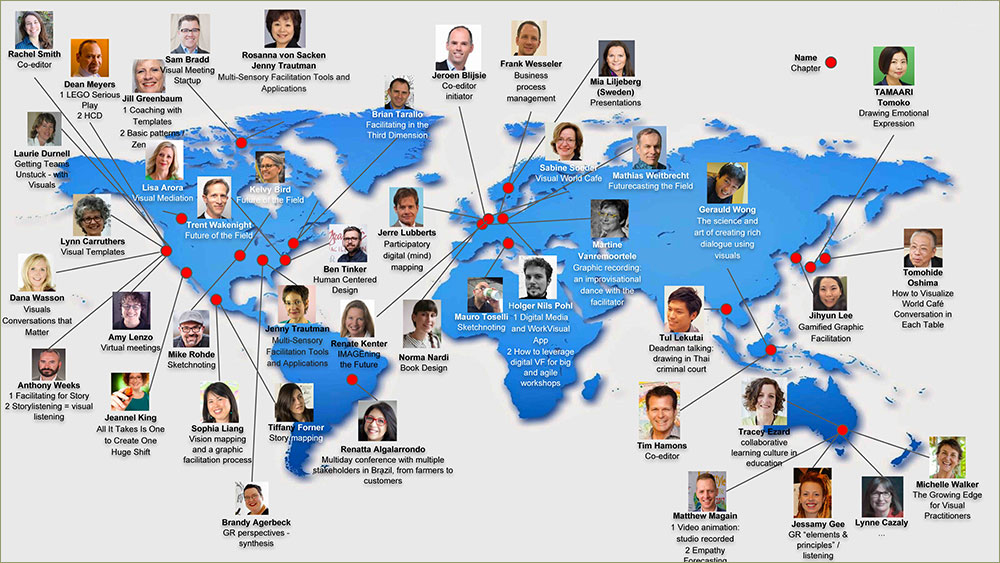 Because many co-authors work in related realms of practice, it was important for those people to connect with one another for a couple of reasons: to make sure their writing didn’t overlap and to share best practices. The authors marveled at the remarkable sense of unselfishness by those taking part in the project; the spirit of generous sharing was infectious.

This spirit existed not only at the San Francisco sprint, but across the world. An author could read a chapter in North America written by a Belgian practitioner, then get on a Zoom call with him the next day. This instant connectivity made it easy to collaborate across miles and time zones.

The Special Sauce That Brought It All Together

The sprint successfully modeled facilitative processes for aligning disparate energies on a blended team to create an experience that is synergistic rather than frustrating.

Virtual collaboration is not just about connecting and saying hi. It’s about having a multi-function virtual shared workspace that can be used to structure the work, pairing a seamless process with the technology and tools needed to work collaboratively together at a deeper level.

This sprint was a vivid demonstration how important it is in virtual collaboration to have a champion, someone who is prepared to organize the process and tools and be the cheerleader throughout. In this instance, Rachel, Tim and Jeroen all played that role for our globally dispersed authors in their respective regions.

It was thrilling to work in this creative way with great folks who are innovating and growing the field of visual practice. The Grove office was buzzing with creativity and synergy. It was such fun, and at the same time the work that was getting done was tremendous!

Many remarked that this experience was more valuable than a conference, in that conferences tend to stay more on the surface and often don’t allow for the deep concentration required by writing and editing. Some authors said it helped them sharpen and expand their thinking about their work. People kept saying things like, “This is a wonderful process.” “This is amazing.” “I wish I could do this all the time.”

Our community shined and strengthened through the book sprint. A deep sense of professional respect has been fostered among this group of people. We can’t wait to see the book move through the final stages of design and publishing!

Watch a video interview with Mary Alice Arthur about the sprint.

About the Third Photo: This screenshot of Asia/Pacific participants was taken near the conclusion of the sprint. From top left: Co-editor Tim Hamons (Singapore) and his son; Co-Editor Jeroen Blijsie (The Netherlands) with Mary Alice Arthur (USA) and Renate Kenter (The Netherlands); Michelle Walker (Australia); Tul Lekutai (Thailand); Gerauld Wong (Singapore); and Jihyun Lee (Korea).