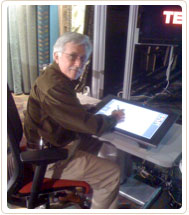 Capturing “big ideas” visually is one of the things folks at The Grove do best, so the TED2008 conference offered a rich landscape of thought from which to work. The program for the 2008 gathering in Monterey, California was designed for participants to consider the really big stuff happening in our world today and contemplate the biggest questions facing us… Who are we? What is our place in the universe? How do we create? What stirs us? How can we change the world?

Based on The Grove’s ground-breaking history of fostering insight and communicating ideas through big picture visualization and visual planning tools, founder and president David Sibbet was invited to capture the ideas presented by some of the planet’s leading thinkers at the event.

TED is a legendary gathering of leaders in technology, entertainment and design, the brainchild of well-known information architect Saul Wurman. Started in 1984, the conference became a kind of Davos for the digerati, and in 2001 was sold to the non-profit Sapling Foundation headed by Chris Anderson. The current mission, embedded in its tagline “Ideas Worth Spreading,” is to give millions of knowledge-seekers around the globe direct access to the world’s greatest thinkers and teachers. More than a thousand people attend the growing number of TED conferences each year, paying pricey fees that provide access to a stellar event as well as fund the media and other communications that are subsequently made available to people worldwide.

Visualizing and graphically recording each of the 50 TED speakers using Autodesk Sketchbook Pro on a Wacom Cintiq tablet computer at the four-day Monterey event, David worked with a team from TED2008 sponsor (and client of The Grove) Autodesk, which included “rock star” designer Kevin Richards and John Schmeir, both of Autodesk, and Phil Davidson of Perceptive Pixel.

Kevin’s drawings of the speakers and David’s depiction of their ideas resulted in a tour-de-force of interactive visualization technique, producing some 700 illustrations over the four days, which are now available in a downloadable book created by Autodesk’s Tom Wujec.

Autodesk’s “BigViz” activities at TED also provided a captivating demonstration of multi-touch technology, like that found on the i-Phone or Microsoft’s surface technology. All the images created by David and Kevin for each TED presenter were available by touch on a 3.5 x 14-foot Perceptive Pixel multi-touch screen display. Touching on one of the pictures would cause it to expand and show the grouped and attached pages. These could be touched and turned, expanded, shrunk, or grouped with other pictures.