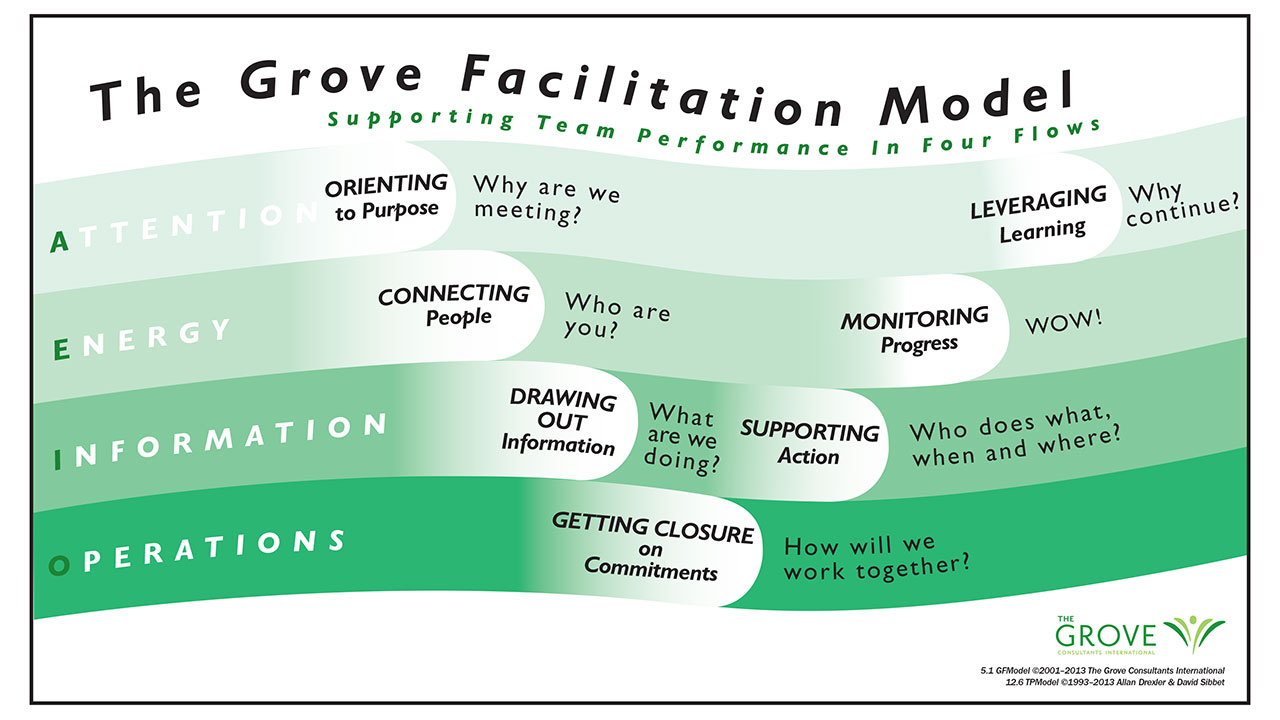 I want to reflect a little on why I think that personal development is essential to “mastery” in facilitation, and how we approach teaching about “mastery” at The Grove. We define facilitation as “the art of leading group process toward agreed-on outcomes with full participation, creativity, and ownership from all involved.” Facilitation is about serving the group and its collective purpose as distinguished from one’s own. Leaders and team managers are the ones who often set the purpose and goals for a group.

Consultants may often be acting as agents for leaders, but when a person says he or she is facilitating, most people would expect that person to serve the group. This intention plunges anyone who facilitates into the position of needing to take everyone into account during a process. Given that orientation, one measure of mastery would be the extent to which a facilitator can relate to, understand, and help a wide range of people. That capability requires one to come to accept, with humility, the different aspects of oneself and others that you might not be comfortable with, personally.

It is possible to facilitate within an industry or a given functional area and develop a great deal of proficiency without spreading out to the larger universe of experience represented in large organizations. It is also possible to be very facilitative without much experience if one is firmly anchored in a beginner’s mindset and able to learn VERY quickly from the group.

If you are facilitating graphically, however, and choosing to reflect the group’s process and thinking on large charts as a way of guiding the group, your listening and sensibility is completely exposed! This raises the bar on what constitutes mastery.

Facilitation becomes even more challenging if one works across sectors and boundaries, works with entire organization systems, or moves into community involvement and transformation processes. This work calls for deeper than ordinary command of one’s own awareness and sensibility. I personally can’t conceive of someone being a good facilitator without working hard on his or her own personal development. In my experience, I find myself limited much more by my own awareness than by limitations in the situations in which I facilitate. So, I work out.

The Grove’s Facilitation Model™, built on a framework called “The Four Flows,” was inspired by Arthur M. Young’s Theory of Process. It illustrates what a facilitator needs to attend to while the group is focusing on purpose, trust, goals, commitments, and the like.

The four levels provide an archetypal way of thinking about the four ways we humans relate to things. Because we are creatures that live upright on the Earth, and ground is down, we illustrate the most constrained level—the “Operational” level of group process—as on “the ground.” The least constrained and freest way we relate is through our consciousness and attention. This is illustrated as the top level. In between is our experience of “energy”—meaning the movement, dynamics, and emotional body of a group—and “information,” referring to people’s ability to think symbolically in words, pictures and numbers. In ancient times these levels might have been called “spirit,” “soul,” “mind,” and “body.” These flows also resonate with what Carl Jung called intuition, feeling, thinking, and sensing.

This kind of conceptual model is a type of map aimed at visualizing the complete span of considerations needed, and is stated at a general level of abstraction. However it is not the “territory” itself—the actual situation of any specific group, where all these things happen together.