Seeing the forest and the trees is vital to effective decision making. Much of this involves thinking through what needs to be compared with what.

You as a leader can ask for functional plans to be presented to you in ways that aid you in comparing and prioritizing activities using whole-system vision. These types of environments are called decision rooms, project rooms, or rapid decision support centers.

Something magical happens when you begin to consider your entire meeting space as a visual environment. “Big-picture thinking” is a figure of speech, drawn from our experience of being able to imagine much more richly when the pictures are really big! 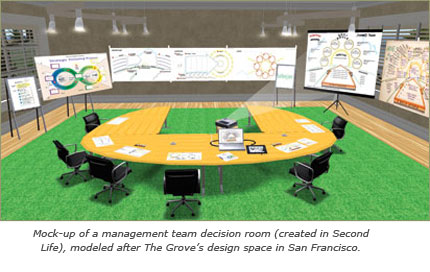 Posting large banners and charts can convert any room into a decision room. No other medium reflects the power of panoramic display as directly as simple markers on large sheets.

Many of the most useful group processes are well supported by two simple tools: large matrices and sticky notes.

Making Choices Is the Play

Decisions are the result of choosing one option over another, with reasons or criteria being either implicit or explicit. In essence, a visual decision room creates ways to keep both the criteria and the options visible.

This environment also makes it easy to move options around to determine priorities. By engaging in “what-if ” thinking, participants can create different scenarios and visualize the impacts.

This type of exploration is what any designer does during the prototyping phase of a project. Sticky notes, used along with graphic templates staged in a decision room environment, create the capability for a whole group to participate in this kind of exploration during decision making sessions.

A great example of using a temporary decision room occurred at an alignment meeting called in 2008 by CEO John Schiavo at Otis Spunkmeyer. Following a successful visualization of the overall company strategy, he wanted to see everyone’s priorities in one place and then determine the trade-offs. This was a departure from creating independent plans and having top management make the decisions.

John asked all of the functional groups to conduct planning workshops to determine their objectives, goals, strategies, and measures (OGSMs) for the coming year, aligned with overall Otis strategy that had been visualized on a large mural. Each of the function managers then brought a big chart to the alignment meeting with the results of his or her group’s planning. 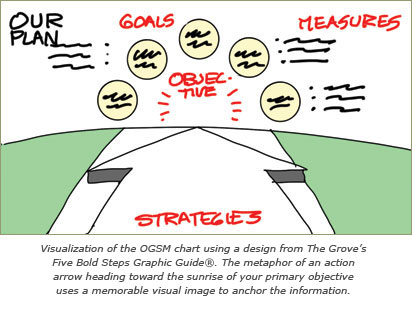 These charts were staged on walls around a big conference room in a hotel near the company’s headquarters and became the focus for the briefings to follow. It took most of the day to go through twelve functional presentations.

By the last hour, dozens of specific decisions items had been identified. The group focused its remaining time entirely on making these decisions.

With John orchestrating the dialogue, in one hour all the decisions were sorted, owners assigned, and teams formed. Functional owners stepped up. The top team would huddle from time to time, then announce a new decision.

In the end, everyone walked out agreeing on the full sweep of decisions. Being able to see everything at once made it both possible and efficient.

All charts from the meeting were digitally copied and compiled in a book that was sent out to all participants. These looked just like the charts that everyone had seen during the meeting, adding to buy-in and engagement.

John guided his functional directors in not only what kind of information they should consider, but also how he wanted them to report on it. This created an environment supporting more engagement and insight than the usual “roll-up-your-numbers” annual business planning process.

The group’s active discussions and charting also gave the leadership a clearer idea of the overall context. As a result, they were supportive of the outcomes.

For these reasons and so many more, the use of decision rooms can be a game-changer for your organization.

This article is adapted from Visual Leaders: New Tools for Visioning, Management, & Organization Change, by David Sibbet. This is the third book in his Visual Leadership series. See also: Visual Meetings: How Graphics, Sticky Notes and Idea Mapping Can Transform Group Productivity, along with Visual Teams: Graphic Tools for Commitment, Innovation, & High Performance.