Common Team Breakdowns (and How to Prevent Them) 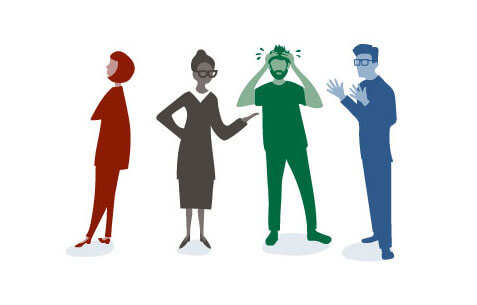 Why do teams so often fail to achieve the results they were created to accomplish?

We sat down with Laurie Durnell, The Grove’s director of consulting, to get her thoughts regarding the team challenges she sees most in the field. The following is a distillation of that conversation.

People gravitate toward individuals that think like themselves or have a similar “style” to their work. Style differences can be interpreted as a source of conflict, rather than a strength. For instance, big-picture thinkers can be seen as unrealistic by detail-oriented implementers. In the same way, feet-on-the-ground folks can be seen as resistors by visionaries. People can take different style behaviors personally. We judge one another and often attribute motivations that may not be there rather than leveraging our differing abilities.

People also connect more easily with people that are part of their everyday work flow, while having difficulty with remote team members and with those with whom they don’t often interact. These combined factors end up creating an “in-group” versus “out-group” mentality, much like cliques in high school.

Working with teams to appreciate individual differences and points of view is foundational for team success. Making time in regular meetings to have personal check-ins is one way to improve the informal connection that is necessary to loosen up the cliques.

Everybody wants to do too much, or the organization’s demands are high and people don’t know how to say “no” or how to prioritize. Taking a step back to see the big picture is what is often needed. For instance, on a leadership team, members tend to be focused on their function. Resistance to planning and prioritization arises when it is perceived as more work, rather than understanding that it could make their lives easier in the long run. Teams tend to rely on immediate-reward band aids rather than making tough choices that result in systemic fixes.

Teams often suffer from a lack of decision-making clarity—not knowing who on the team has the authority to make decisions or not understanding the decision-making process. Often a variety of decision-making approaches needs to be considered for different situations. One size does not fit all. In a “tell” situation, an authoritative directive is needed. In a “sell” situation, an idea may need to be shopped around, with the decision’s value explained to garner buy-in. In a “consult” situation, a leader may empower others to recommend the decision, with the leader as “consultant” and ultimate owner of the decision. In a “co-create” situation, the decision-making is jointly owned by the team. Understanding the value of these different approaches and when to use them is critical for a successful team. Use criteria, such as time urgency, engagement, and level of risk, to select the right decision approach. “Tell” decisions are fast. “Consult” decisions take longer but can speed implementation by driving greater alignment and innovation.

Any decision-making approach can become a liability when over used. For example, if everyone feels entitled to be involved in every decision, forward movement can seem excruciating. Some people feel like they need to be at all meetings to be “in control” rather than trusting others to make decisions. On the flip side, if team members don’t feel that their voice is valued in relevant decision-making, it may be a symptom of a lack of trust on the part of leadership. Sometimes a risk calculation can help. Lower risk decisions can be delegated. A higher risk, non-reversible decisions may require that more people should be involved. 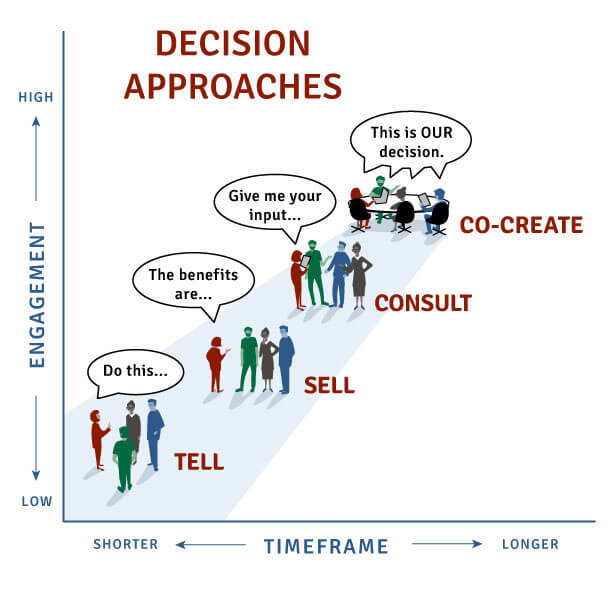 Team members are often on multiple teams and stretched too thin. In a recent team intervention, the team complained about one team member who consistently missed deliverables. Trust was betrayed. It turned out that this person was on five teams. It was more than a full-time job, so there were five teams mad at this poor guy. The surprising revelation was that the problem wasn’t with the individual or the teams, but organizational resources. The solution was for all five team project managers to meet and shift their timeframes to stagger deliverables from this team member. When the organization pushed back on the delays this caused, all five teams were aligned with an airtight reason. Without investing more resources, the organization needed to shift its expectations.

The pressure to get results and only focus on the work at hand means little attention is given to interpersonal dynamics and the fundamental commitment of team members. Small concerns can grow into major issues. The willingness and skill to have courageous conversations often are lacking with teams—many times at all levels of an organization. Some cultures are naturally conflict-averse. People are afraid that having tough conversations will damage relationships. The reality is that not only does performance suffer, but relationships suffer, as well. Framing difficult conversations in a graceful, non-blaming way is key. Appreciating that all individuals have different opinions, different life experiences and different reactions to situations. Basing conversations on neuroscience findings, such as is described in David Rock’s SCARF model, is one approach. Susan Scott’s Fierce Conversations is another resource. Teams that invest time in creating ground rules for conversations, specifically when emotions get triggered, allow groups to overcome the hurdles. When a leadership team succeeds at this, it has a ripple effect on the whole organization.

Not Taking Time to Reflect, Recognize and Learn

Burnout is widespread in organizations. Not only do people belong to many teams at once, few spend any time really learning from one another. Successful teams learn from mistakes and failures instead of blaming and defending. Asking the team to reflect on what has worked well and where it sees room for improvement keeps the team in a continual improvement mindset. Creating a culture of balanced feedback, both providing and receiving, at all levels of team leadership and membership, keeps communication flowing and the work improving. When leaders aren’t open to feedback, it sets a tone that stifles efficiency and innovation. When team members aren’t open to feedback, performance and growth can suffer. Providing recognition is essential for balanced feedback and is often overlooked. People who are continually unrecognized do not perform well. Pausing to celebrate and learn from individual and team successes keeps teams refreshed.

More about The Grove’s Team Performance System can be found in this brochure. 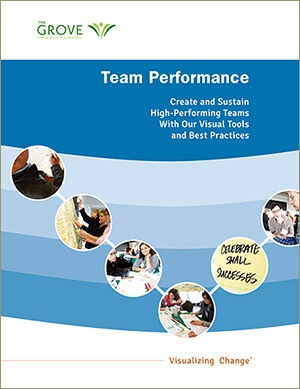