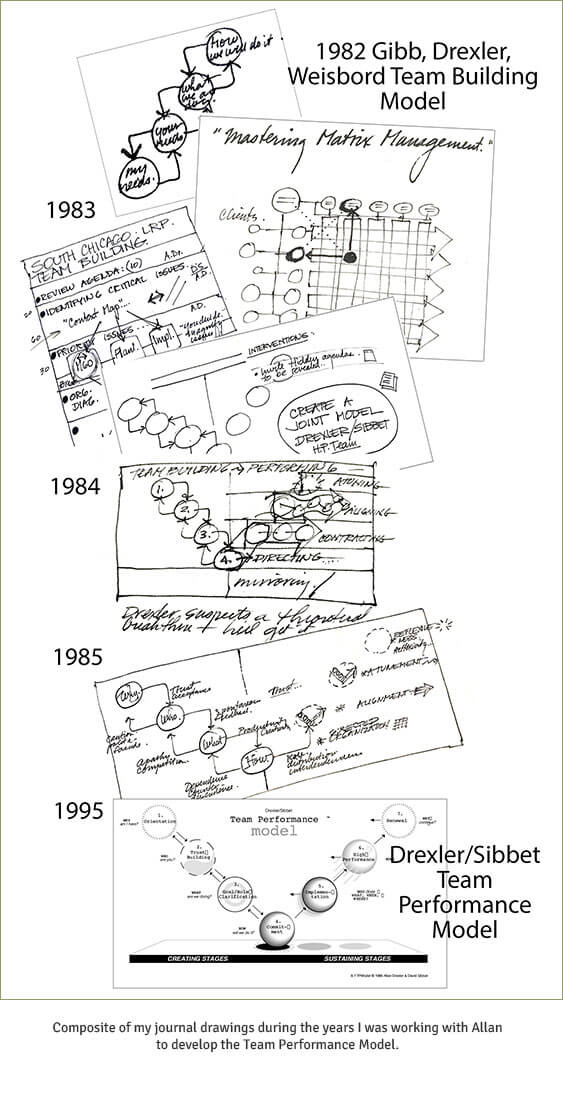 I was saddened to hear that my friend and colleague Allan Drexler passed away recently. He was 88. In the 1980s, he and I co-developed the Drexler/Sibbet Team Performance Model® and the facilitative methods and tools connected with it. Without Allan, we would not have this model. The depth of his field experience with teams, coupled with his deep understanding of group dynamics developed in sensitivity training at National Training Labs, kept the work grounded in the real world of working teams.

How the Work Began

I first met Allan in 1982, when I gave a workshop about facilitation that included Arthur M. Young’s Theory of Process. Allan shared a team-building model he had developed with Jack Gibb, an influential social-science researcher, and Marv Weisbord, a thought leader in organizational development. It laid out predictable questions people ask when joining a group: Why are we here? Who are you? What are we doing? How will we work together?

At that time Allan was working extensively with matrix-type organizations. He invited me to explore writing a book on the subject as well as collaborating with him in his General Mills client work. A year of productive work together led to our offering a Creating and Leading High Performing Teams workshop through National Training Labs. Ultimately we led five of these workshops. We also involved Russ Forrester, who co-led the program with Allan well into the 2000s.

The idea of integrating Allan’s model with Process Theory emerged in the process of designing that program for teams. I realized that the Gibb, Drexler, Weisbord Team Building Model mapped perfectly onto the first stages of Process Theory, in which I was immersed. I had a hunch that the Theory of Process would also describe what happens after a team forms. Allan had been using another model for contracting to describe this part of the process.

Allan loved dialogue, to which he brought a keen wit and the tenacity of a true New Yorker. We had an ongoing and robust debate over every element of the emerging Model, especially around nomenclature. For example, the word “commitment” is frequently used to represent a willingness to enter emotionally into a process or relationship. It also applies to the very bottom-line commitments involved in contracts and joint ventures. We came to agree that we wanted the word “commitment” to reflect the more concrete aspects of financial, calendar, and staff commitments—the essentials in getting real results. Likewise, we chose the word “trust” to define the second stage when people are assessing “who” they are working with. A popular Tuchman model of teaming calls this stage “storming,” but we felt that pointing to trust was more universally useful.

The Model was developed hand in hand with an assessment tool we called the Team Performance Inventory, co-created with Russ Forrester, who had been trained in assessment work. Allan’s insight was that the real value of these tools was to initiate the right conversations on the team. He believed that that real teamwork developed through engagement and mutual understanding. He also knew, from his many years of client work, that people trust data and consider it “valid” if it comes from them rather than from an outside observer. Because people’s answers to written questions are deeply embedded in their widely varying assumptions and interpretations, dialogue about what the assessment answers actually mean is the active catalyst for involvement.

As we developed the Inventory, we agreed that people would need indicators of the behaviors and characteristics for each of the seven stages—both for issues that have been successfully “resolved” and issues that remain “unresolved.” These indicators became the basis of the team assessments that were developed later.

In addition to the Model and the Inventory, we created a Team Leader Guide featuring a compilation of the best practices that The Grove and Allan had developed over the years. After gaining clarity about what was working and not working in their team, people were invited to try some new practices that addressed how they mutually agreed they would like to improve their team’s performance.

As I reflect on all I learned from Allan, I keep thinking about the care with which he would introduce these tools to clients. He believed strongly that creating a “social contract” with leaders and teams about what they hoped to accomplish was key to creating an environment for having truly deep discussions that could change behavior and performance. He would insist that team leaders be fully enrolled in the aim of creating a rich dialogue, while avoiding any kind of performance management in which people would be evaluated or disciplined as a result of taking the Inventory. Allan felt it was equally important to “contract” with the team itself about how it will approach taking the assessment and participating in a team-improvement meeting. To this day the importance of these social contracts remains a feature in my own consulting, thanks to his coaching.

Because Allan lived on the East Coast and travel was always a feature of our collaboration, we eventually developed separate practices with these tools. He and his colleague Russ Forester went on to develop several additional tools, as did The Grove. We agreed to sustain the Model by consensus and not make changes to it without dialogue. Our achievement in that area is part of why the tools have become so widely used.

This article is slightly adapted from an article of the same name on my blog.