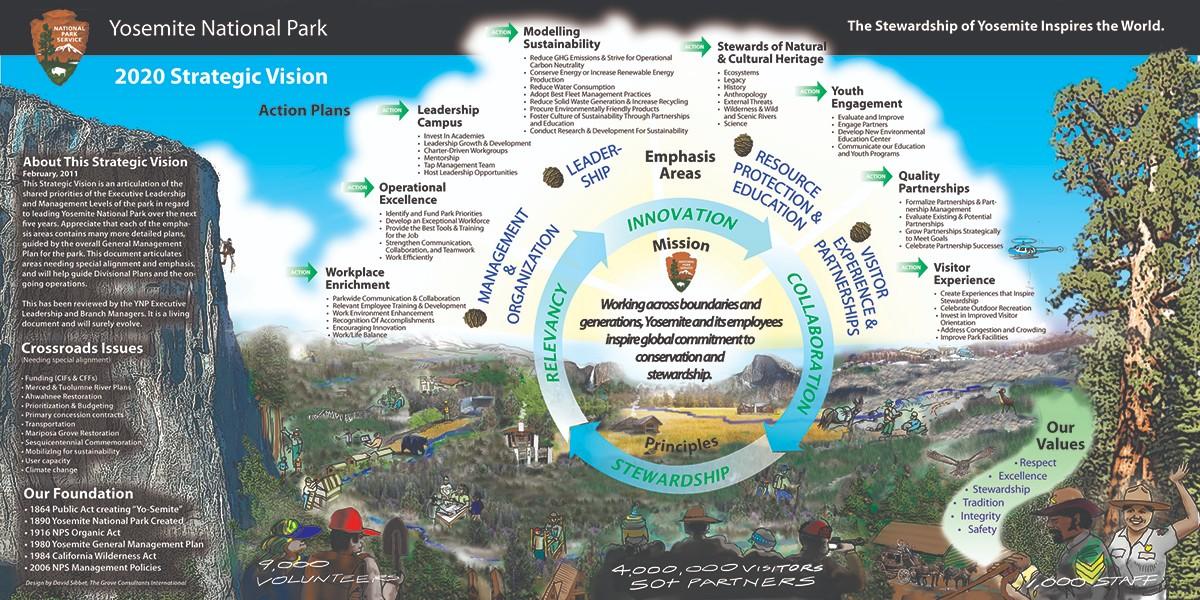 Yosemite National Park is one of the jewels in the U.S. National Parks System. In 2006, with 4 million visitors a year, demand for park access was increasing while resources were shrinking. The park was very clear on its overall mission and general plan, but deciding on priorities for the near term (five years) had become essential.

Don Neubacher, the park's new superintendent from Point Reyes, engaged The Grove to facilitate a strategic visioning and Storymapping process for Yosemite. Don sought a collaborative approach and had worked with The Grove in the San Francisco Bay Area. He understood the power of strategic visioning using visualization.

Don had his direct reports begin the process in a two-day workshop, assessing the overall needs of the park and agreeing on a general vision and “emphasis areas” for the next five years. They also brainstormed possible visualization concepts. Don then involved his three dozen branch chiefs in a second meeting to refine the vision and sign up for work on more detailed action plans for the next five years. The group worked both on the items in the emphasis areas and on the specific graphics in the composite picture of Yosemite Valley and its surroundings.

The map went through six versions in the process of getting everyone aligned. The final image combines values, issues, visions, and immediate priorities into a single visual communication: “The Stewardship of Yosemite Inspires the World.” To anchor this big picture in specific objectives, the functional leaders signed up to develop explicit action plans for each of the emphasis areas.

The park's internal director of communications used a report template that the leaders co-developed with The Grove. His team subsequently created a printed and digital visual plan that included all of the emphasis area action plans and received national attention.

The success of this process resulted in similar techniques being used for two big river planning efforts in the park for the Tuolumne and Merced Rivers.