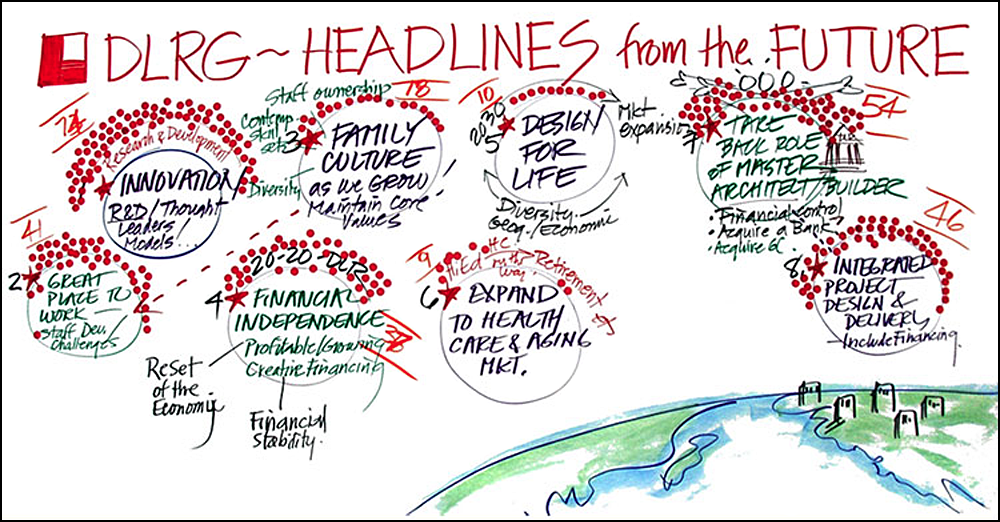 Over the past 20 years The Grove has facilitated a strategic visioning process every five years for the DLR Group, a leading architecture and engineering firm with a dozen offices in the United States. At the first strategic-visioning process in 1999, the firm had just moved to a shared ownership model. Some 50 partners gathered for a two-day retreat, which was followed by a day of game planning a month later. A big part of their dialogue was whether or not the firm should focus squarely on becoming known for design and whether they should commit resources to that end. They chose to do this.

In 2012, after two more five-year strategic-visioning processes, one of our close collaborators at the firm got in touch to share wonderful news: Architect Magazine had named DLR Group the #1 design firm in the United States. “Your process has helped us transform our firm,” he wrote. Most recently an inclusive planning/leadership development initiative involved 560 people from the firm, with sessions facilitated at each office by young leaders trained by The Grove.

DLR Group leadership identifies the following elements of its success:

Setting the Bar High: Believing that small goals would lead to mediocrity, DLR Group sets high goals. Becoming the #1 design firm in the country is an example. This started with wanting to be “a” recognized design firm, which evolved into an intention to become “the” leading design firm. For each of three planning cycles a set of five-year visionary goals was established to guide and inform all of the firm's activities, making these big goals an organizational North Star.

Using Goals as a Guidance System: After clarifying the firm's strategic direction, team members became laser focused on visions and business plans and the strategies to achieve key goals. Initiatives were launched around each of the goals, using functional forums—such as their design forum—to support implementation and consistency.

Using Planning at Leadership Development: As the process evolved, DLR Group moved from just involving partners to involving a cross section of its high potential young leaders. In one of the off-sites, draft bold-step visions were developed by small groups organized by age. A rich dialogue ensued. The younger members wanted to know what “bold” meant as they worked on “bold steps," and they invited the older leaders to step up to some risk.

Creating Memorable Media: After the first process, a large chart illustrating the elements of DLR Group's strategic vision was posted in every office. In the last process the firm’s designers took the output and created their own compelling graphics to underlie the firm's new direction.

“If you are looking for the secret sauce, it is engagement. We conducted a session in every single office for every single person in the firm, so that everybody’s fingerprints were on the final vision. People really took to that method of interaction. It allowed them to contribute meaningfully within a planning process that valued input and interaction. In the end they felt, ‘My ideas are part of this.’”