Why Do Visuals Work with Teams? 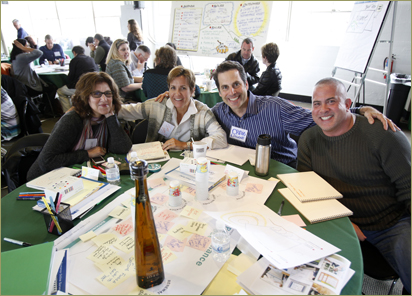 What do loosely coupled systems, a stand-up meeting, and tequila have to do with each other? They were all elements in our successful Visual Teams workshop a few weeks ago at Fort Mason, in San Francisco, and argue for why visuals are working with teams.

At the opening of the workshop we invited everyone to share his or her best team experience, and then identify the relevant qualities on a Mandala Vision Graphic Guide® (Groups invariable rediscover the success factors described in the Drexler/Sibbet Team Performance Model® through their own experiences). I noticed one table group in back where everyone was standing up, gesturing, circling around to place a blizzard of sticky notes on various circles labeled with high-performing team qualities.

I also couldn’t help but noticing a big word—TEQUILA—on one of the templates near me in the front. This group was sitting but equally animated, and a good bit more vocal. They too had a jostle of little sticky notes all over the template.

These both related to a book I read recently called, Last Child in the Woods: Saving Our Children From Nature-Deficit Disorder, by Richard Louv. He argues that there is a difference in human development when we learn to interact with “loosely coupled systems” like those found in nature and “tightly coupled systems” like those we encounter in technology, cities, and so forth. In nature leaves blow, wind comes and goes, animals pop out unexpectedly, and our senses alert themselves to a greater level of ambiguity and skill in dealing with uncertainty and surprise. In highly designed and orchestrated environments, things are less fuzzy and unpredictable and call out different abilities, such as quick response times.

I think this idea applies to human nature, as well. When groups and teams interact in loosely coupled ways, interesting and surprising things emerge, such as the tequila example above. It turns out that one of the people at this table shared his best story that involved a team always breaking out special tequila when it celebrated successes, and it became an icon of the team’s high-performing style. This group loved identifying this as a success factor, and was even happier when a bottle of Don Pedro’s showed up after the lunch break!

The stand-up group, and all the other tables in their own way, was also experiencing the value of loosely coupled systems. A simple graphic template, a simple provocative question, and some small sticky notes create a “system” that is optimized for useful accidents and surprises. There is not a really precise way to complete this kind of exercise. The way people write down the team qualities varies. Where everyone places the stickies varies. Whether you are looking at it upside down or face forward makes a difference. The group is called to move around. All this stirs up the thinking and feeling sensibilities of the group, and helps with both building trust and sharing critical information. The fact that this type of high engagement is persistent with visual work that is interactive is part of why it’s so popular.

The challenge in virtual work is being in a system that inherently has to be more tightly coupled to work. The meeting times must be precise. The agendas are more structured. But Vivian Wright, a skilled virtual worker, treats online meetings like radio shows and keeps them lively. It’s the same principle, and she loves simple frameworks that let people add bits and pieces and move them around. If the audio is good and the platform robust (she loves Adobe Connect for this reason), you can get the same “loosely coupled” feel.

Another sign of this working was the large number of the participants who stayed around after we finished. Quite a number were huddled around the tequila!