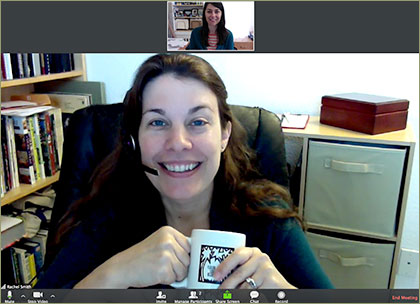 I used to dislike using video in remote meetings. All the social cues we get from following another’s gaze simply don’t work on computer video. No matter where other people look, they seem to be captivated by something just out of view.

Surprisingly, I’m getting comfortable using video—sometimes I even enjoy it. Still, I’ve noticed that it often is used ineffectively. Since I’ve found myself in more video conferences than usual lately, I have been noticing what works and what doesn’t and thinking about why. This led me to write Rachel’s Rules of Order for Videoconferences, a work in progress.

These twelve guidelines actually are not about order so much as about reducing the confusion and disorientation that people feel when meeting remotely. These are useful for any kind of meeting, not just videoconference.

Rachel’s Rules of Order for Videoconferences

1. In the first five minutes, have everyone in the meeting say hello and show themselves. This is especially crucial when some people are together in a room but not all of them are on camera at once, and others are remote. It is disorienting for the remote folks to hear disembodied voices chiming in unexpectedly. It’s also common politeness to make sure everyone understands who is within earshot.

2. If some people are on camera, everyone should be on camera. If some participants don’t (or won’t) have video, at least show a photograph or other image of every speaker. The people who are actually on video will seem more present and animated than those who are not. Getting everyone on equal footing helps.

3. Figure out where the camera is on your device and look at it while you are talking, not the person’s face. This may feel strange at first because your instinct is to look at the face of the person you are talking to. If you look into the camera, you will be making eye contact while you are speaking, while if you look at their face on your screen, you will not. For example, if you’re using a Mac, there is a green dot at the top of your screen when your camera is on. Try moving the video window to the top of your screen so you are naturally looking toward the camera, then just lift your gaze to the green dot when you speak.

4. Look at your camera more than you look at your notes or at other parts of your screen, even when you aren’t talking. Videoconferencing actually allows you to make eye contact with multiple people at once, so take advantage of this. Although it may feel weird for you at first, it feels natural to the person you are talking to.

5. Take time to be social. Ask how everyone’s day is going, or what they did over the weekend. Really listen to what they say and respond to what you hear. It seems counter-intuitive; doesn’t socializing just waste time in meetings? In fact, everything goes smoother when people are relaxed and comfortable with one another. The few minutes you take in being social will pay off later.

6. Have a hot drink while you meet, and encourage everyone else to grab a cup of something too. There are several advantages to this. First, if everyone is sipping some of the time, no one is talking all of the time. Second, it may actually make everyone more friendly. A 2008 Yale study indicates that people who hold a warm beverage perceive others as warmer and friendlier, and are also more likely to be friendly themselves. If you’ve had too much coffee already by the time your meeting rolls around, try hot water with lemon.

7. Listen for understanding, not to respond. It’s natural to spend your listening time thinking of what you yourself are going to say in response. Be alert for this in yourself and try to put your own thoughts aside while you focus on what others are saying. If you’re afraid you’ll forget what you want to say, jot a quick note on a piece of paper, then go back to listening. (This is good general practice, not just for videoconferences. Read more about good listening habits here.

8. Ask good questions. Instead of following someone’s comments with a statement, try following with a question that invites them to say more. Or, rephrase back to them what you think you heard to check for understanding. It’s often difficult to feel connected to people in video conferences. Asking good questions demonstrates that you’re paying attention and makes the speaker feel that you are really connecting with them.

9. Be okay with some silence, especially after you ask a question. Silence can feel awkward, particularly on a video call. You ask a question and then nobody says anything, and everyone is just sitting there staring at you! So you start talking again to dispel the awkwardness. Don’t! What’s actually happening in that moment is that people are gathering their thoughts. Introverted thinkers in particular are framing what they want to say. Just sit and look relaxed and interested (even if you are privately freaking out) and leave an inviting space for others to fill. They will.

GET CLOSURE ON COMMITMENTS

10. Reflect agreements back to the group. There are lots of ways to do this, but if you’re in a videoconference, use what you’ve got. Keep a big marker and blank paper sheets handy. When an agreement is reached, write it down in large, clear letters and hold it up to the camera. (You might want to make sure your camera doesn’t reverse your image. Test it beforehand with a friend, because some software shows YOU a mirror image of yourself even though other viewers see you correctly.) Give everyone a moment to read your summary of the agreement and check for accuracy. At the end of the meeting, run through all of the agreements again, then follow up with an email restating them.

11. Check for consensus explicitly. We’ve all been in meetings in which the convener says, “Everyone in agreement? Yes? Great, let’s move on.” Wait, what? When was I supposed to consider, let alone voice, my level of agreement? Don’t mistake silence for agreement in videoconferences. Try introducing a simple agreement scale. When you need to check for agreement, have everyone review the scale and hold up the number of fingers or otherwise indicate their level of agreement. Recall that consensus can mean no one is vetoing, although for more important decisions you might set a higher baseline for assessing agreement.

12. Make space for the responsible parties to state their own commitments. In the interest of time, it can seem expedient for one person to run rapidly through a list of who said they would do what. You’ll get more follow-through if you give everyone a moment at the end of the meeting to state for themselves what they have agreed to do. This also gives you a chance to address any misunderstandings or unclear action steps.

Although video meetings are only a small part of the remote-working environment, they provide vital opportunities to build relationships and cement commitments among long-distance colleagues. Observing these guidelines will help you make the most of the time your team spends together online. Try introducing some of them in your next video meeting.

1. This article is adapted from two articles from Rachel Smith’s blog, digitalfacilitation.net, that are accessible here and here. 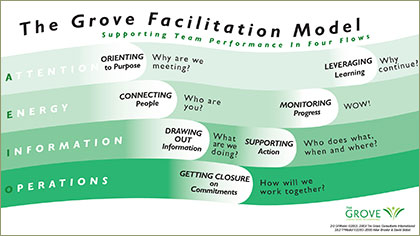