The Tamalpais Lands Collaborative: “One Mountain, One Vision”

The Grove’s Laurie Durnell facilitated a multi-stakeholder process with all of the public-land management agencies for Mt. Tamalpais. The resulting collaborative will sustain the well-being of the mountain on which Laurie grew up. 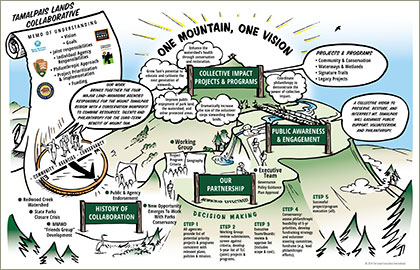 Seeds for a multi-agency collaboration were planted back in 2003 when The Grove facilitated a watershed visioning process for Muir Woods. This culminated in a March 21 signing ceremony that launched the Tamalpais Lands Collaborative. (1)

Located just north of San Francisco, Mount Tamalpais (“Mt. Tam”) is composed of lands managed by several agencies: the Marin Municipal Water District and national, state and county parks. Yet the people who hike on Mt. Tam don’t experience any lines when they step over jurisdictional boundaries. For a hiker out on a beautiful day, it feels like a seamless experience, as it does for animals and plants.

Roots of the Tamalpais Lands Collaborative

William Kent, who donated Muir Woods to the public, also donated a large amount of Mt. Tam’s watershed to create the Marin Municipal Water District. Preserving the public’s enjoyment of this area was built into the bequest.

Unfortunately, restoration, new trail construction, and environmental education all require resources beyond what the Water District can provide. Watershed Manager Mike Swezy envisioned a solution: a Friends group that could fundraise for education, restoration and recreation on Mt. Tam.

Facilitating Collaboration on a Watershed Scale

Swezy invited Durnell, director of consulting at The Grove, to get involved. First she facilitated the initial gathering of Mt. Tam advocates. Then during the year of facilitated meetings that followed, the idea came up to replace the independent Friends group with an initiative held within The Golden Gate National Parks Conservancy.

Swezy brought together area land-management agencies to explore this groundbreaking idea of a collaboration among a not-for-profit organization and multiple jurisdictions – thinking on a watershed scale. Durnell and Grove Senior Consultant Rachel Smith graphically facilitated a public meeting in which a groundswell of support convinced the skeptics to endorse the concept of such a collaborative.

Storymapping the Collaborative: A Big-Picture View

After a working group hammered out the details, The Grove created a summary graphic (see image, top). Laurie explains, “We needed a (Grove) Storymap® that could quickly orient and inspire everyone in the meeting. Because I had been involved in the project all along, and because the working group had done a spectacular job of crafting the vision and agreements, we had a rich body of content to draw from.”

The Storymap was presented at the signatory meeting of the land-management executives and the Conservancy. It illustrated the foundational pre-work that led to the agreement, the partnership between the land-management agencies and the Golden Gate National Parks Conservancy (2), and the high-level steps needed to bring the vision of the Tamalpais Lands Collaborative to life.

The executive team meeting was a critical first step in setting the vision for the Collaborative and determining the scale and scope of the endeavor. Going forward, the working group will identify projects that either crossjurisdictional boundaries or implement actions that provide important stewardship and visitor experience benefits.

Personal Significance of This Work

Durnell’s engagement with this initiative has been personally meaningful. “I grew up on the slopes of Mt. Tam. My childhood was full of hikes, scrambling around and exploring the mountain. It is a beloved place. Anybody who spends time on the mountain loves it.”

Another point of connection: Durnell’s undergraduate degree was in Conservation of Natural Resources. Early in her career, as a professional naturalist she shared the magic of Mt. Tam by leading natural history hikes.

As they say, life comes full circle – at least, this time it did.

1. In addition to the San Francisco Chronicle article linked above, see this story in the Marin Independent Journal for more about the signing ceremony that officially established the Tamalpais Lands Collaborative.

2. For background and additional details about the organizational partners taking part in the Collaborative, click here.