Recently The Grove’s Rachel Smith graphically supported an online event that addressed the complexities of higher education in a digital age. Using a tablet, illustration software and web-conferencing technologies, Rachel created visual notes during each of the gathering’s three featured online events.

The event was hosted by EDUCAUSE, a networking and resource hub for IT professionals working in higher education. The three-day online Sprint featured an interactive mix of webinars, summary articles by guest bloggers, online discussions and Rachel’s graphic recordings. 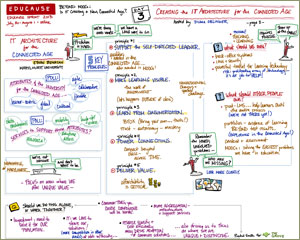 MOOCs and the Changing Landscape of Higher Education

Much discussion at the Sprint focused on MOOCs—”massive open online courses”—and their implications for the future of online learning in higher education. How is technology changing the learning experience? What infrastructure can best support the connected age? MOOCs raise these and other provocative questions about education’s costs, credits, credentialing, and relationship to lifelong learning needs.

Watch a short video: “MOOCs and Beyond.”

Considerations for Graphic Recording of a Large Online Session

The challenge Rachel faced was how best to document the daily webinars visually. How could she and her team get the graphics into the virtual room in real time? This was important because when people don’t see the visual notes until after a session, it is much less powerful than when people can observe the notes being created while the conversation being documented is taking place.

With 600+ people simultaneously attending a virtual session, the added bandwidth required for a live screen share might have degraded the experience for many listeners/viewers. In any case, sharing the full recording process in real time was not an option, because only one screen could be displayed at a time and all of the presenters had slides to show.

After much testing and experimentation, a plan was finalized to share a screenshot every five minutes from the visual recording in-progress. Although people couldn’t watch Rachel create the visuals in real time, they could still see the progression of her visual notes. These periodic screenshots engaged participants’ interest and helped to anchor the group memory of the sessions’ content.

To record the daily webinars virtually, Rachel used her Cintiq 24 HD linked to an iMac, mirroring her display and sharing SketchBook Pro. Unlike most graphic-recording situations, Rachel was not in the same room as the speakers. She wasn’t even in the same virtual room as the other participants.

Instead, she used a phone connection in a separate Adobe Connect conference room with just two other team members. One team member took and sent periodic screenshots to participants in the “main room.” Sometimes the whole image was displayed, while at other times the screen was cropped to focus on a particular part of the conversation.

To provide another dynamic way of experiencing the visuals, a second team member did a video screen capture of each of Rachel’s visual recordings. Then a time-lapse video of each virtual graphic recording was created, compressing the 90-minute recordings to just 3 minutes each. These provide a visual perspective of how the conversations developed.

The EDUCAUSE Sprint page has Rachel’s visual notes in both formats, along with all other resources from the Sprint. Check out this dynamic discussion of where online learning may be heading.