Escaping the Despondent Pit of Techno-Despair 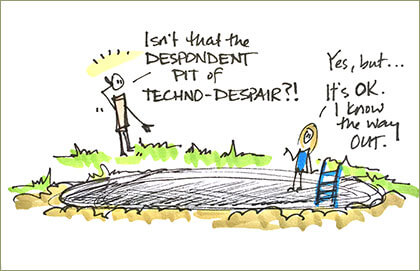 Have you ever been in the Despondent Pit of Techno-Despair?

You know what I’m talking about if you’ve been there. You’ve been trying to get some type of technology to work, usually in front of other people. It probably worked yesterday, or even earlier today when you tested it by yourself, but the controls are now mysteriously incomprehensible and you’d swear they look different from how they did just an hour ago.

Possibly a lot of people are waiting to do some very important work supported by the technology you’re fooling with. Time stretches and warps in a weird way, and it feels as though everyone else is holding their breath and staring at you with saucer-sized eyes. You start to feel that you are at the bottom of a giant black hole.

Yeah… welcome to the Pit.

As a virtual-meetings facilitator, virtual-facilitation trainer, and maker of digital graphic movies, I spend a lot of time in the Despondent Pit of Techno-Despair. This sometimes surprises people because I generally seem to have a handle on technology. But think about it: I do a lot more walking along the edge of the Pit than most people do. It stands to reason that I’ll fall in fairly often.

So why would I keep wandering around on the edge of this scary, deep, dark Pit if I know how awful it is when I fall in? Simple: I also know the way out. I’ve built a ladder that I use to get out of the Pit. Rung by rung, I can climb my way back to the sunshine.

Knowing this makes me unafraid to fall in, and even lets me laugh about it and take it in stride. (Well, most of the time.)

The Ladder I Use to Get Out of the Pit 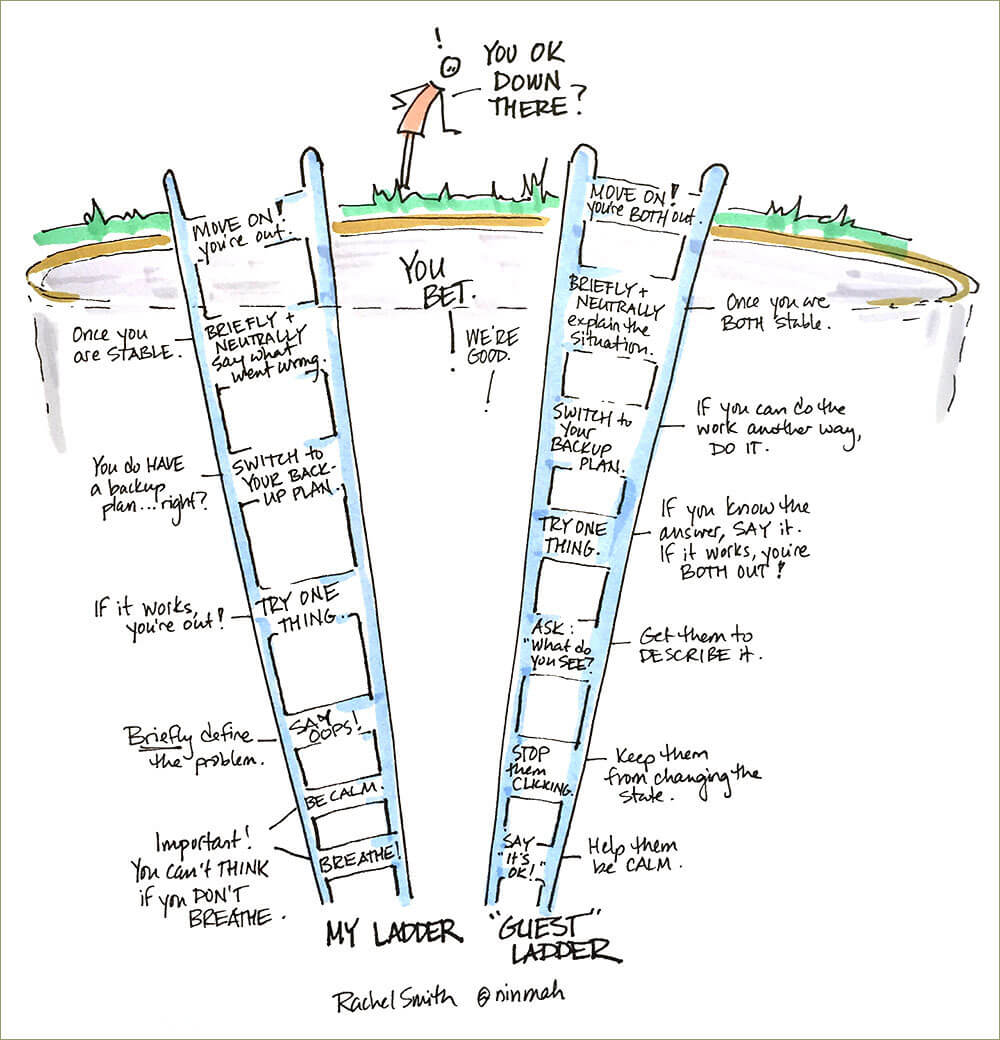 I’ll show you my ladder. This is the ladder I’ve built for when I’m working with a group and I’m the one having the issue:

• Starting on the bottom rungs, I breathe and I stay calm. I can’t do anything if I’m not calm, so that’s the first thing to get under control.

• Moving up a rung, I say, “Oops!” That is, I acknowledge there’s a problem and I briefly say what it is. This usually gives me the space to realize what’s likely going on and then I can… •

Move up to the next rung, where I Try One Thing. Just one. The most likely one. If it works, yay! I’m out! If not…

• I reach up to the next rung, which is to switch to my backup plan. (Always have a backup plan.)

• Once I’m in a stable place with the backup plan in effect, I briefly say what went wrong that made me put the backup plan into action. I describe it neutrally, remembering that the computer is really not out to get me, nor am I an idiot. I just fell into the Pit, that’s all.

At this point, I reach the top rung… and I can move on. I’m out!

The Ladder I Use to Help Others Out of the Pit

I also know how to climb down on purpose and bring other people out with me. It’s almost worse than falling in yourself: You’re walking along with someone on the edge of the Pit, and suddenly they fall in and start panicking. They’re terrified you’re going to wander off and leave them down there (which is what happens when they encounter really bad tech support).

The temptation to cut the poor person loose can be very strong. Don’t do it! Climb down there and show them the way out, now that you’ve learned it:

• The bottom rung is to get them calm. Say, “It’s okay, let’s take a moment to figure this out.”

• Next rung… get them to stop making it worse. Say, “Okay. Don’t click anything until we figure out what’s going on.” (If they keep clicking, they keep changing the state of the problem, and you’ll never work it out.)

• From there, climb up to the next rung and ask them to describe what they see on the screen, again without clicking anything. Literally ask, “What are you seeing right now on the screen?” (This is assuming you’re working remotely and can’t see them, of course. If you’re right there with them, you can skip this rung.)

• If what they describe gives you the answer, go ahead and say it. If that works, yay! You’re both out. If not, there’s more ladder to grab.

• If there is no other Plan B, try doing a share of their screen—such as with a Skype call, for instance—so you can see exactly how to help them navigate back to the task at hand.

• Once you are stable, either in the backup plan or because you can see their screen and talk them up another rung, explain what happened in a neutral way. Remember, nobody is an idiot, and the computer isn’t out to get anybody. It’s easy to fall in the Pit. No worries.

• Then, grab that top rung and move on—you’re both out!

You Never Know When You’ll Need That Ladder

Take my ladder with you the next time you’re heading for the edge of the Pit. It really helps to have a way back out to the sunshine.

This article is slightly adapted from an article originally published at Rachel’s blog, digitalfacilitation.net under the name, “The Despondent Pit of Techno-Despair.” It was written during the recent Facilitating Virtual Collaboration workshop, a new four-session virtual Grove workshop led by Rachel Smith. This workshop will be offered again in early January 2016—see workshop description for details.