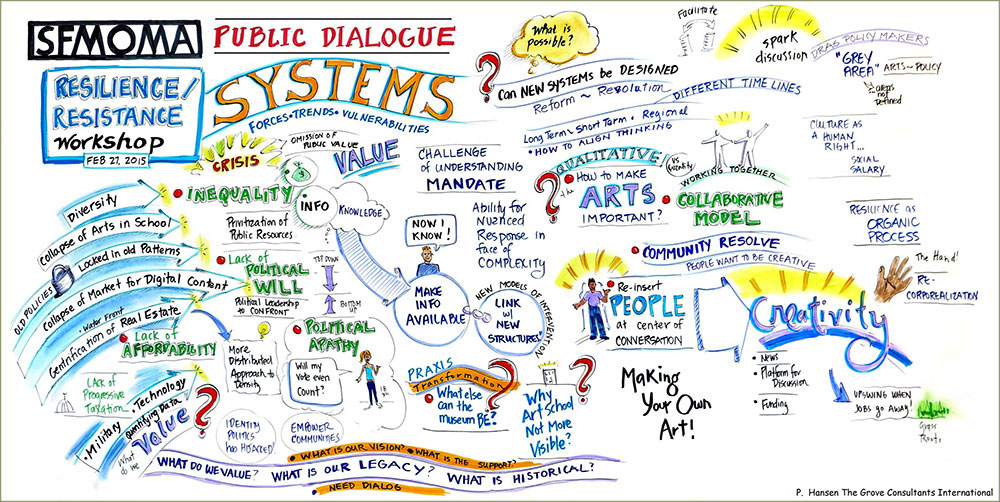 The San Francisco Museum of Modern Art (SFMOMA) is undergoing a substantial expansion that will more than double its exhibition space (1). While closed for construction, its Public Dialogue Department is engaging with the Bay Area arts community as a “Museum-on-the-Go.”

Recently the department convened four day-long Public Dialogue workshops with local thinkers, artists, designers, and others working to nurture community arts and culture. This was an opportunity for reflection about the issues that impact Bay Area visual artists.

The department requested The Grove’s graphic-recording services to support discussions in each of the four workshops and weave together their inputs into a coherent synthesis. Senior Consultant Giselle Chow was The Grove’s project lead, teaming with Senior Associate Paula Hansen to record four days of rich conversation.

Each workshop delved into one of four core themes:

• Reskilling: What does it mean for individuals and organizations to reimagine their skill sets as their fields and environments undergo fundamental change?

• Resilience: How can educators and art practitioners in the Bay Area foster collective agency and civic culture in the communities they work amidst?

• Storytelling: How can we increase our capacity to build community through storytelling?

• Visibility: How can research, information, communities and creative practices be made visible to wider publics? (2)

The workshops shared a common structure. For each, participants set the context, discussed a glossary of shared language, and brainstormed a toolbox of key elements and approaches.

Giselle recorded three of the four sessions. A longtime art educator and San Francisco native, she says, “I was well acquainted with the issues they were describing and the context in which they are working, as well as the process of what it means to be an artist and create things.”

Art That Lifts Up a Community’s Concerns

Social practice also emerged as a thread that wove throughout the conversations (3). In the social practice model, artists work within a community. They become familiar with that community’s core issues as well as its hopes and visions. Then they collaborate in a public or shared space to express these artistically. The resulting artworks shine light on the community’s issues of concern when they are viewed in museums or other public settings.

A Focus on Storytelling

For the Storytelling workshop, the emphasis was on writing stories for change. A group of journalists, creative writers, community organizers, and cultural historians—people who use story as their vehicle of communication—explored how one becomes a strong storyteller who sparks civic imagination through the power of story. Participants brainstormed a “toolbox” of promising methods and tools (see below). 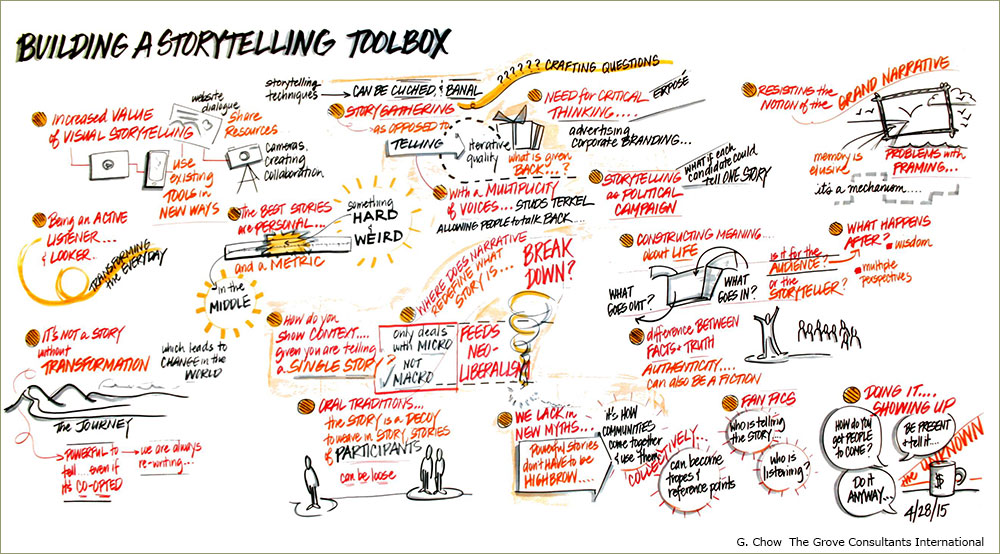 Public Dialogue’s Program Associate Stella Lochman reports, “People were impressed with being able to see all of the ideas up on the walls surrounding them. At the end of the day they were sitting in the midst of their ideas. Everyone in the room wanted to know how they could get a Giselle to come into their meetings. She is the ‘secret weapon!’ ”

Summing up, Stella says: “I have been to numerous workshops, daylong getaways and offsites. This is one of the first ones that I went to where people thoroughly enjoyed it and had something tangible to walk away with at the end of the day. A lot of that had to do with the fact that we were building our conversations around a visual takeaway, in contrast to being focused on a list of agenda items. Watching someone draw in front of you, you want to complete the picture.”

1. Learn more about the SFMOMA expansion. The museum is scheduled to reopen in Spring 2016.

2. The summaries of the four themes are from a communication that went out to workshop participants.

3. View a video about the field of social practice, a joint production of SFMOMA and public television station KQED.